Each of the Debtors' top 50 unsecured claims holds a claim in excess of $480k with the Debtors owing in total a huge $173.0mn of trade debt. On a list dominated by these trade creditors, Andrews and Kurth LLP has a $522k professional services claim.

Michael Glazer, the Debtors' President and Chief Executive Officer, commented, “[T]he increasingly challenging market environment was exacerbated by the COVID-19 pandemic, which required us to temporarily close all of our stores and furlough the vast majority of our associates. Given these conditions, we have been unable to obtain necessary financing and have no choice but to take these actions.”

The Crowley Declaration (defined below) provides: "The Debtors commenced these chapter 11 cases to stabilize their store base and operations. The Debtors continue to believe that there is value in their brands and operations as a going-concern, and have explored potential transactions in the preceding months. The Debtors and their advisors will continue to explore any and all alternatives throughout the course of the chapter 11 cases to maximize value for their estates."

This slightly sugar-coats a chapter 11 process that has already had a chance to "explore" going concern options, options that are clearly at loggerheads with a rapid liquidation process that many stakeholders will be pushing for. As noted in the press release above, the default position seems to be "an orderly wind-down of operations," with going concern sales to be considered in the event that they materialize.The Debtors' store closing motion [Docket No. 27] also pays lip service to the notion that there exist real going concern sale efforts/possibilities and that perhaps even that the delays offered by COVID-19 (stores have to be open before they can liquidate) might actually buy some time for the Debtors' going concern asset sale efforts.

The motion begins, "Importantly, to the extent the Debtors’ sale process results in an interested going-concern purchaser, the Debtors will promptly reverse course with respect to any stores subject to a potential going-concern sale," before reality kicks in: "the Debtors currently plan to reopen 567 [press release above notes 557] of their stores by May 15, 2020 [and be in a position]…to commence and conclude the Wind-Down as expeditiously as possible under the circumstances."

In a declaration in support of the Chapter 11 filing (the “Crowley Declaration”), Elaine D. Crowley, the Debtors' Chief Restructuring Officer detailed the events leading to the Debtors' Chapter 11 filing. Perhaps one of the most interesting aspects of what is now a familiar story (a retailer weakened by "the general downturn in the retail industry" and then finished off by COVID-19) is the near open-warfare between the Debtors and their landlords, a relationship always fraught for distressed companies but now with animosity increasingly front-loaded in the process by landlords that know they will be the first target the moment the Debtors hit Chapter 11. In this declaration, the Debtors note that aggressive landlord tactics (lock-outs, threatened evictions and inventory seizures) accelerated the Debtors "existential threats" and the Chapter 11 filings. Expect that aggression to continue in Chapter 11 as landlord look for adequate protection assurance and decry the fact that they are underwriting the bankruptcy process for senior creditors by providing free rent to the Debtors as they liquidate.

The Crowley Declaration states: "A confluence of factors contributed to the Debtors’ need to commence these chapter 11 cases. These include macroeconomic factors—including most significantly, , which has led to a decrease in sales, competitive sales promotions resulting in reduced profit margins, and the marked shift away from brick-and-mortar retail to online channels. Over time, these factors have tightened the Debtors’ liquidity and complicated their vendor relationships. As described above and in further detail below, these factors culminated in liquidity challenges beginning in winter 2019 and continued into 2020.

As a result of COVID-19, the Debtors closed their stores in March and furloughed substantially all of their employees. They also did not pay most of their rent due for March,6April, and May. The Debtors received some default notices in March and early April, but the rate of such notices picked up materially in late April and early May. In addition, landlords began to lock the Debtors out of certain stores and threatened to evict the Debtors and dispose of the in-store inventory. Because the Debtors operate retail stores, these threats represented an existential threat to their operations, as well as potential safety threats to the communities which they have both depended upon and supported. Responding to and managing these default notices and related litigation outside of chapter 11 would have been a monumentally difficult task.

As of the Petition date, the Debtors have outstanding debt obligations in respect of their October 2014 credit agreement comprised of (a) approximately $178.6mn asset backed loan (the “ABL”) and (b) approximately $47.4mn under their term loan, each as summarized in the chart below:

According to the Debtors: "We are a leading retailer of trend-right, moderately priced, name-brand apparel, accessories, cosmetics, footwear and home goods. The company operates stores in 42 states through BEALLS, GOODY’S, PALAIS ROYAL, PEEBLES and STAGE specialty department stores, as well as GORDMANS off-price stores. Our stores are predominantly located in small towns and rural communities." 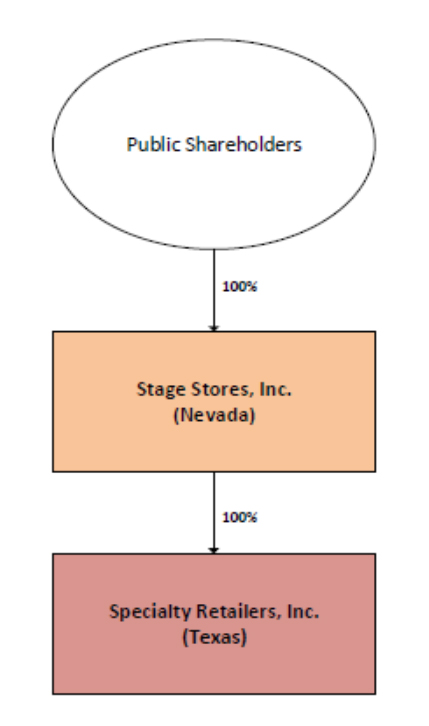