October 14, 2022 – The Court hearing the Stored Solar Enterprises, Series LLC case issued an order authorizing the Debtor to: (i) access $3.35mn in new money, debtor-in-possession (“DIP”) financing from prepetition lender Hartree Partners, LP ("Hartree" or the “DIP Lender,” owed $8.9mn in respect of prepetition debt and also serving as a credit bidding stalking horse) on an interim basis and (ii) use cash collateral [Docket No. 124, which attaches an October 14, 2022 DIP term sheet]. The $5.65mn balance of what is in total $9.0mn of requested new money DIP financing, is to be made available on issuance of a final DIP order, with consideration of that order now scheduled for October 27, 2022.

The Debtor faced a number of objections, which were resolved at the last minute; including that of the Debtor's creditors' committee (the "Committee") [Docket No. 114]. At the October 14th hearing, initially scheduled to hear the Debtor's motion for an emergency hearing (and objections thereto) but then expanded to include a substantive discussion of the DIP financing motion when a settlement was reached, counsel for Hartree described key elements of the accord agreed amongst the Debtor, the Committee and Hartree which paved the way for the issuance of the interim DIP motion.

The key element of the settlement was the establishment of a $500k reserve fund sourced from sale proceeds, with that amount to be earmarked for general unsecured creditors. Also agreed was (i) a shift of $25k from amounts budgeted for the Debtor's professionals to the Committee's professionals and (ii) a carve out from the DIP's adequate protection liens for specified avoidance actions and D&O-related claims; with those "specified causes of action," including any against Hartree, left with the estate after a sale.

It was also noted that the Debtor's intended to file a sale motion by October 17th.

The motion [Docket No. 109] explains, “Specifically, the Debtor has an immediate need for the Interim Financing, among other things, (i) for ordinary course operations, such as funding payroll for employees and paying necessary vendors who are critical to ordinary course operations, and (ii) to make necessary capital expenditures; (iii) to acquire biomass inventory in order to sustain operations of its electric generation plants, and otherwise to pay necessary administrative expenses, all in accordance with the Budget. Without immediate access to the Interim Financing, the Debtor’s ability to generate electricity for salt to the New England Power Grid, to pay its employees, and preserve the value of the business will be immediately and irreparably jeopardized, resulting in significant harm to the estate and its secured and unsecured creditors. Such funding is necessary to maintain the going concern value of the Debtor and allow for a successful sale of its assets.”

DIP Budget (see Exhibit A of Docket No. 124 for better image resolution) 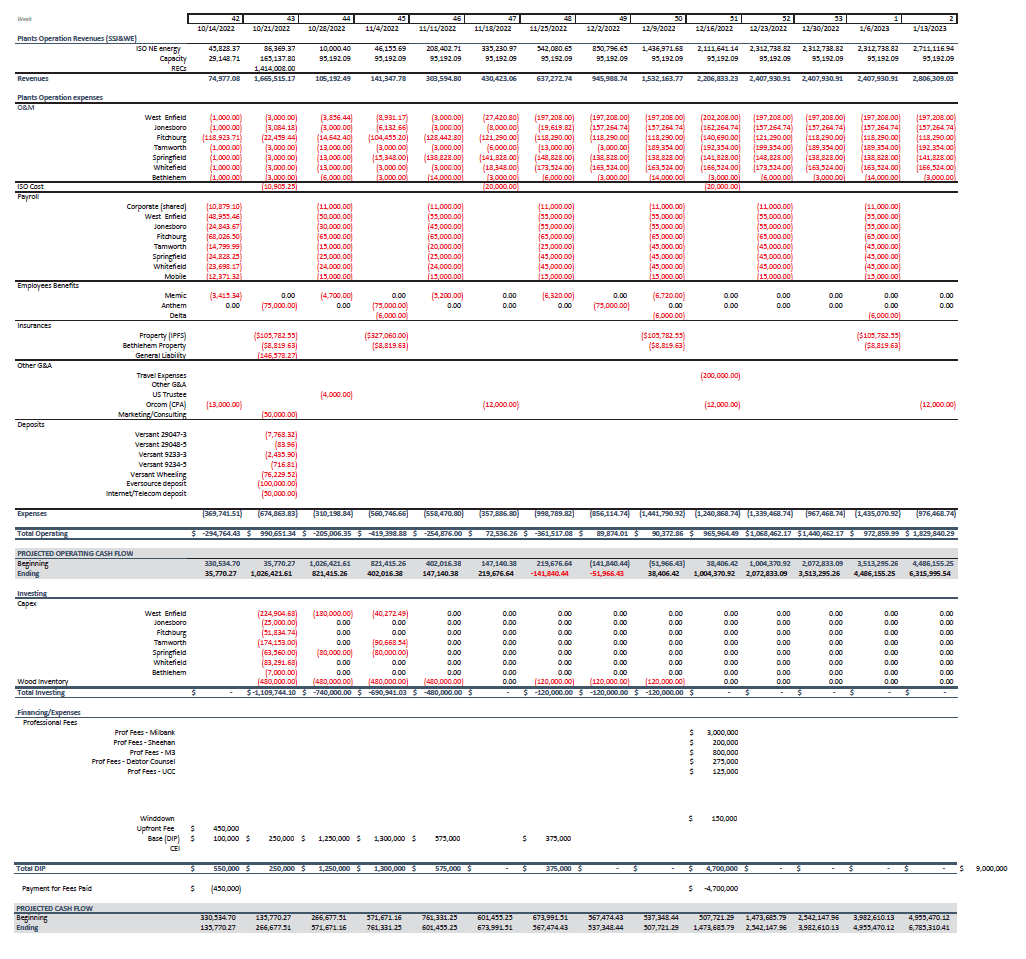