In a press release announcing the pre-packaged filing, the Debtors advised that: “Superior entered the Chapter 11 Cases with the support of holders of approximately 85% of Superior’s $1.3 billion of senior unsecured notes. Subject to the Bankruptcy Court’s approval, under the Plan, the noteholders would receive 100% of the equity to be issued and outstanding by the reorganized Company in exchange for discharging $1.3 billion of unsecured claims arising under the senior notes. As a result, the Plan would eliminate all of the Company’s funded debt and related interest costs and establish a capital structure that the Company believes will improve its operational flexibility and long-term financial health even in a low-commodity-price environment.”

David Dunlap, the Debtors’ President and CEO, commented: ““Since the initial announcement of our planned recapitalization initiative in September, we have been encouraged by the growing consensus of the noteholders that have agreed to support the Plan, as well as the ongoing strong backing and support provided by our customers and lenders…The Company looks forward to quickly emerging from the Chapter 11 Cases in early 2021.”

On December 4, 2020, the Debtors (including Debtor SESI, L.L.C. or “SESI”) entered into an Amended and Restated Restructuring Support Agreement (the “Amended RSA” amending the September 29th original) with certain holders (collectively, the “Consenting Noteholders”) of SESI’s outstanding (i) 7.125% senior unsecured notes due 2021 and (ii) 7.750% senior unsecured notes due 2024 (collectively, the “Existing Notes”).

The Amended RSA and the Plan contemplate, among other things, the following:

The expected effect of the Restructuring on the Debtors’ capital structure is summarized as follows:

The following is a summary of classes, claims, voting rights and expected recoveries (defined terms are as defined in the Plan and/or Disclosure Statement; see also the Liquidation Analysis below)

The Debtors intends to obtain $120.0mn of debtor-in-possession ("DIP") financing; with Debtor SESI as borrower, certain of the lenders under SESI’s existing credit facility (the “Existing Facility”) as lenders and JPMorgan Chase Bank, N.A. as administrative agent. Upon Bankruptcy Court approval, approximately $47.4 million of outstanding undrawn letters of credit under the Existing Facility will be deemed outstanding under the DIP Facility. The DIP Facility is expected to provide sufficient letter of credit capacity to support the Company’s continuing business operations and minimize disruption during the Chapter 11 Cases.

The Disclosure Statement provides: “The oil and gas industry has been in one of the longest, steepest, and most sustained declines in oil and gas prices in recent history. As a result of the sustained market downturn, oil and gas companies around the world have dramatically curtailed capital and operating expenditures dedicated to oil and gas exploration, development and production, which in turn has contributed to the financial distress of numerous oilfield services companies

The Company’s revenues and earnings can be affected by several factors, including changes in competition, fluctuations in drilling and completion activity, perceptions of future prices of oil and gas, government regulation, disruptions caused by weather, and general economic conditions. However, the first three quarters of 2020 were characterized by unforeseeable shocks to the global economy generally, and the energy sector in particular. Specifically, the Saudi- Russian oil price war, combined with the COVID-19 pandemic, led to a decrease in the price of oil which was exacerbated by the decreased demand for oil. These unanticipated events have had a devastating near-term impact on the Debtors’ operations and its various business lines, and has negatively impacted the Debtors’ customers, vendors, and suppliers in all geographic areas where the Debtors operate. In fact, the U.S. oil and gas rig count fell by approximately 25% during the first quarter of 2020 and, as a further result of the COVID-19 pandemic and the Saudi-Russian oil price war, plunged by more than 60% in the second quarter of 2020. Further, according to the Baker Hughes’ weekly worldwide and international rig count data for 2020, the number of oil and gas rigs outside of the U.S. and Canada fell by more than 20% in the second quarter of 2020, each resulting in a decrease in demand for the Debtors’ products and services.

As a result, the Company’s revenue in the second quarter of 2020 decreased by 43% to $183.9 million, as compared to $321.5 million in the first quarter of 2020. As the Debtors’ customers continue to revise their capital budgets in order to adjust spending levels in response to lower commodity prices, the Debtors continue to experience significant pricing pressure for their products and services. The Company’s revenue further decreased by approximately 9% to $166.9 million in the third quarter of 2020." 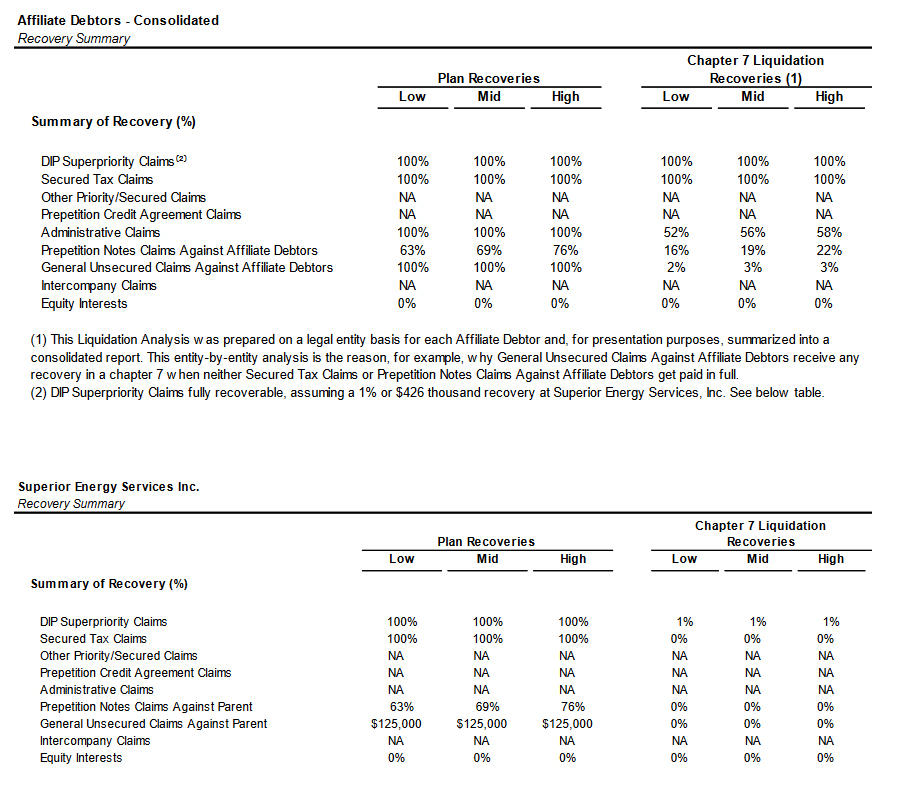 According to the Debtors: “Superior serves the drilling, completion, and production-related needs of oil and gas companies worldwide through a diversified portfolio of specialized oilfield services and equipment that are used throughout the economic life cycle of oil and gas wells." 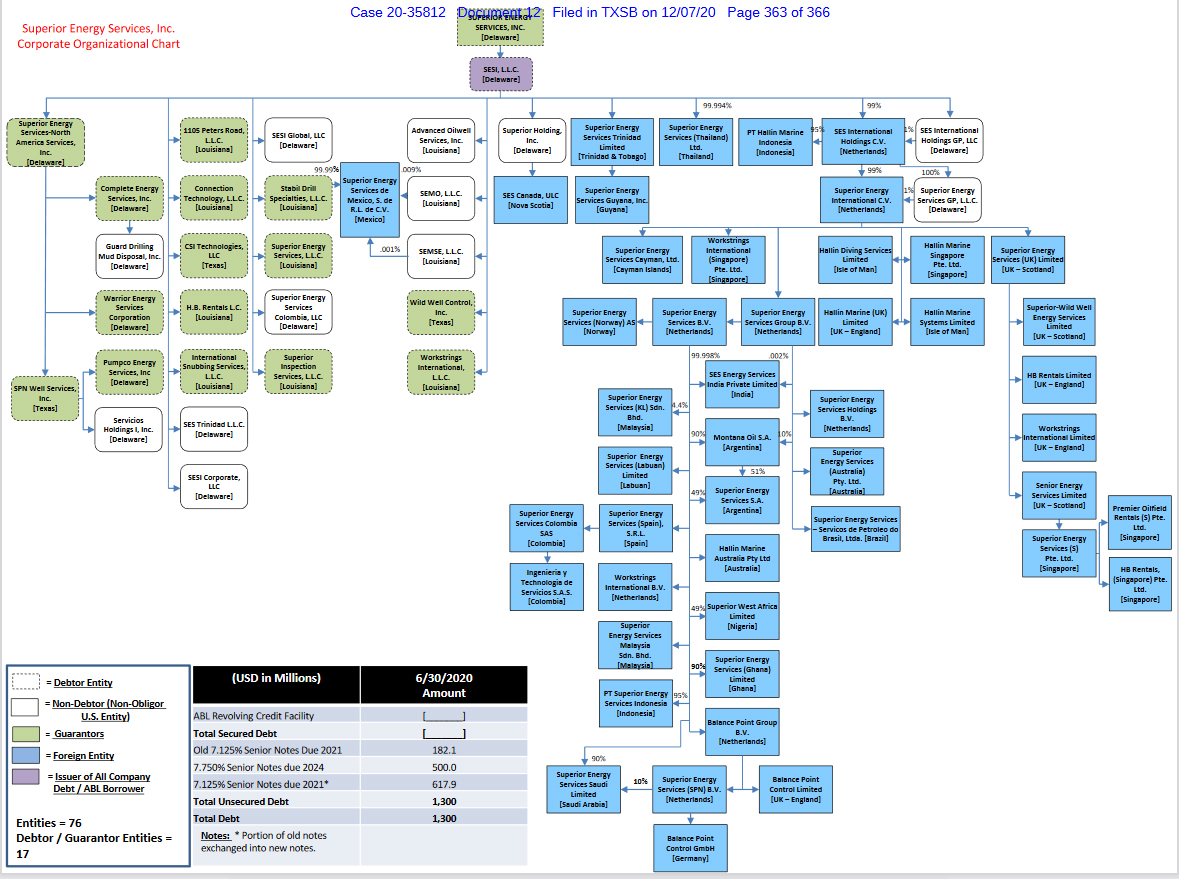