July 2, 2021 – Further to the Court’s June 7th bidding procedures order [Docket No. 256] and the completion of an auction held on June 30th, the Debtors have now filed an asset purchase agreement (the “Boeing APA”) amongst the Debtors, The Boeing Company ("Boeing" or "Parent") and Boeing's acquisition vehicle Central Kansas Aerospace Manufacturing, LLC, (the "Buyer") relating to the Debtors' Kansas assets (the "Kansas Assets") [Docket No. 336]. A sale hearing is scheduled for July 9th.

The Back-Up Bidder, which had its efforts to get named as stalking horse blocked by Boeing, is comprised of entities controlled by Glass Holdings, LLC ("Glass") which also owns the Debtors.

On June 24th, the Court issued an order approving the $31.1mn sale of the Debtors Everett, Washington assets (the “Everett Assets”) to Wipro Givon USA, Inc. ("Wipro Givon") [Docket No. 313]. The Everett Assets stalking horse was handpicked by Boeing further to a marketing process which Boeing directly supervised; with Wipro Givon and Boeing also entering into a separate agreement regarding Wipro Givon’s proposal and related matters (the “Boeing-Wipro Agreement”) which has been filed under seal.

In respect of the Debtors' Kansas Assets, however, Boeing took a very different, if equally involved, approach. Boeing did not affirmatively select a stalking horse (in hindsight, it appears likely that Boeing always envisaged itself as the purchaser), but did effectively veto the Debtors’ own preferred choice, a non-Debtor affiliate controlled by current parent Glass. The Kansas Assets bidding procedures motion [Docket No. 192] provided: “the Debtors were prepared to enter into the asset purchase agreement [with Glass] to serve as a stalking horse bid in the process contemplated by this Motion…Boeing, as DIP lender, was not supportive of the Debtors’ entering into the asset purchase agreement.”

The motion explains, “…in late 2020 the Debtors began to explore strategic options. Among the options explored was a potential out-of-court sale of the Debtors’ Kansas assets to NWI Aerostructures LLC (‘NWI’), a related Glass-owned entity. However, the Debtors and their significant stakeholders were unable to reach agreement on a consensual out-of-court path for such a transaction. Nevertheless, NWI and its affiliates remained interested in pursuing a transaction as the Debtors continued to explore their options.

In March 2021, the Debtors engaged Imperial Capital LLC (“Imperial”) as their investment banker. Since its initial engagement, Imperial has contacted about 80 potentially interested parties regarding a transaction for some or all of the Debtors’ assets (i.e., not only the Assets). As of the filing of this Motion, more than 30 of those parties have executed an NDA and others are in the process of negotiating an NDA. Imperial has also (i) set up a confidential data room for diligence and loaded it with relevant information on the Assets, (ii) responded to diligence requests from potentially interested bidders, and (iii) coordinated site visits for some parties. Since the Petition Date, Imperial has continued, and will continue, to market the Assets as well as the Debtors’ Washington assets.

The Martin Declaration provides: "On February 26, 2021, with the parties unable to reach agreement regarding a consensual path forward, Boeing notified TECT that after March 22, 2021 it would no longer advance funds under the Prepetition Credit Agreement [Boeing acquired the PNC loan in February 2021] except through an agreed debtor in possession financing as part of a bankruptcy proceeding.

Further, the Debtors initiated their own sale process to find a potential buyer or buyers of their assets. In March 2021, the Debtors retained Imperial Capital, LLC (‘Imperial’) to provide investment banking services in connection with a potential sale. Imperial is currently evaluating certain prepetition offers for the various business units and developing a fulsome marketing and sale process. 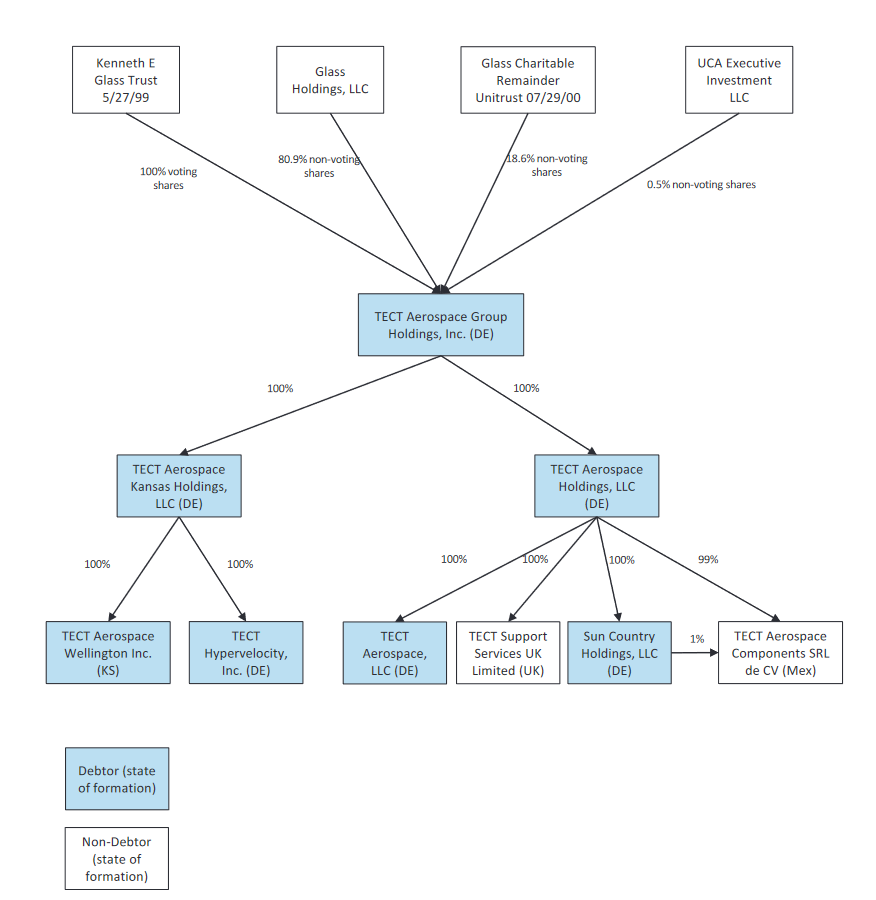