As amended, the Plan now treats the disputed $62.2mn PanAm LOU claim as part of Class 9 ("Existing Tenrgys Equity Interests") if it is allowed at all (with the debtors arguing in the first instance that it should not be). In addition to addressing the rationale for this treatment (see further below), the addendum to the Disclosure Statement also adds: (i) disclosure noting that further to the ongoing disputes with PanAm, "that it [is] no longer in the best interests of the Estates or their stakeholders to seek confirmation of a plan that relied on the Colombian Assets as a source of funding for its implementation [although the Debtors are hopeful that as a result of continuing efforts "the Colombian Assets may become an additional 'unbudgeted' source of funding for the Plan"] and (ii) adds disclosure as to $5.0mn of exit financing to be made available by members of management (see further below).

At filing, the Debtors pointed the finger squarely at creditor PanAm, owned by National Beverage founder Nick Caporella, which had acquired outstanding debt under the Debtors’ “2012 RBL Facility” (with a view to converting that debt into equity in the Debtors’ Colombian assets) in April 2019 before that relationship dramatically soured with the Debtors accusing PanAm of seeking “unilateral control over all of the Debtors’ business — international and domestic…” Please see our Petition date coverage for more on the relationship with PanAm.

The Addendum to the Disclosure Statement provides: "…the Debtors’ wholly owned non-Debtor affiliate, Telpico, holds three oil and gas concessions in Colombia that have been assigned a risk-adjusted value of more than $97 million. These Colombian Assets are prospects that require significant capital to explore and develop, and each concession is subject to certain work-progress deadlines that must be met, or the ANH may terminate the concession. As described in Section II.B of the Disclosure Statement, the Debtors’ efforts to find third-party financial partners for the timely development of the Colombian Assets resulted in a relationship between the Debtors and PanAm, when PanAm and Tenrgys signed a letter of understanding dated April 2, 2019 (the ‘LOU’). But PanAm never provided the Debtors any funding for the Colombian Assets….

Because PanAm had been insisting on more and more control of the Colombian Assets and appeared already to have an alternative operator lined up to replace Telpico, the Debtors’ Original Plan in these Bankruptcy Cases proposed to surrender Telpico to PanAm in satisfaction of its alleged Secured 2012 RBL Facility Claim of approximately $71 million. The Debtors sought a confirmation timeline for their Original Plan that would have allowed the Debtors to continue performing necessary site-prep work—funded by the Debtors’ cash flows—until the Original Plan could be confirmed and ownership of Telpico transferred to PanAm in December 2021. This pace would have enabled the Debtors to work with PanAm to ensure a smooth transition and meet the necessary drilling deadlines…

But…PanAm objected to the Original Disclosure Statement accompanying the Debtors’ Original Plan. As a result of the Debtors’ efforts to address PanAm’s objections, the Debtors were unable to obtain Bankruptcy Court approval of the Original Disclosure Statement by the relevant milestone date in the Debtors’ prepetition RSA with the Consenting 2013 Loan Lender. Although the Debtors were able to enter into the Amended RSA with the Consenting 2013 Loan Lender, the Debtors determined, in light of the resulting delay, that it was no longer in the best interests of the Estates or their stakeholders to seek confirmation of a plan that relied on the Colombian Assets as a source of funding for its implementation. Therefore, the Debtors determined not to proceed with the Colombian Collateral Tender Transaction contemplated in the Original Plan.

Update on Treatment of PanAm’s Second Proof of Claim

In general, the PanAm LOU Claim alleges damages arising from the April 2, 2019 LOU, which is described in Section I of this Addendum and in Section II.B of the Disclosure Statement.

PanAm alleges that under the LOU, in the event of a chapter 11 filing by Tenrgys, Tenrgys was obligated to propose a chapter 11 plan that would convey to PanAm substantially all of the equity in the reorganized Tenrgys and entitle PanAm to receive a share of “Available Cash” distributed according to an “Available Cash Waterfall” as further described in the LOU. PanAm alleges that when Tenrgys filed these Bankruptcy Cases two-and-a-half years later, Tenrgys breached the LOU by failing to propose a chapter 11 plan that treats PanAm’s claims in the manner described in the LOU. PanAm further alleges that Tenrgys breached the covenant of good faith and fair dealing, engaged in a civil conspiracy with others to cause damage to PanAm, and induced PanAm to enter into the LOU by fraudulently misrepresenting in 2019 that in the event of bankruptcy, PanAm would receive substantially all of the equity in Tenrgys and a first-priority share of the “Available Cash” pursuant to the 'Available Cash Waterfall.' For all these claims arising from the LOU, PanAm alleges that it is entitled to an unsecured claim in the amount of $62,213,038 in “equity value” after and in addition to the full repayment of the Secured 2012 RBL Facility and all other debt.

The Debtors further believe that, because the PanAm LOU Claim arises from what PanAm alleges to be a transaction concerning securities of Tenrgys (or rescission, reimbursement, or contribution), to the extent, if any, the PanAm LOU Claim becomes an Allowed Claim, then section 510(b) of the Bankruptcy Code requires that the PanAm LOU Claim be subordinated to all claims or interests that are senior to or equal the claim or interest represented by the Tenrgys equity interests to which PanAm alleges it was entitled under the LOU, unless such equity interests constitute 'common stock' of Tenrgys, in which case the PanAm LOU Claim shall have the same priority as 'common stock.' Accordingly, under the Plan, any Allowed PanAm LOU Claim shall be included within Class 9 – Existing Tenrgys Equity Interests, and shall have the same priority as Existing Tenrgys Equity Interests for the purpose of distribution under the Plan.

PanAm disputes the Debtors’ above characterization of the PanAm LOU Claim."

The following is an updated summary of classes, claims, voting rights and expected recoveries (defined terms are as defined in the Plan and/or Disclosure Statement, see also an amended Liquidation Analysis below):

Valuation of the Debtors’ Assets 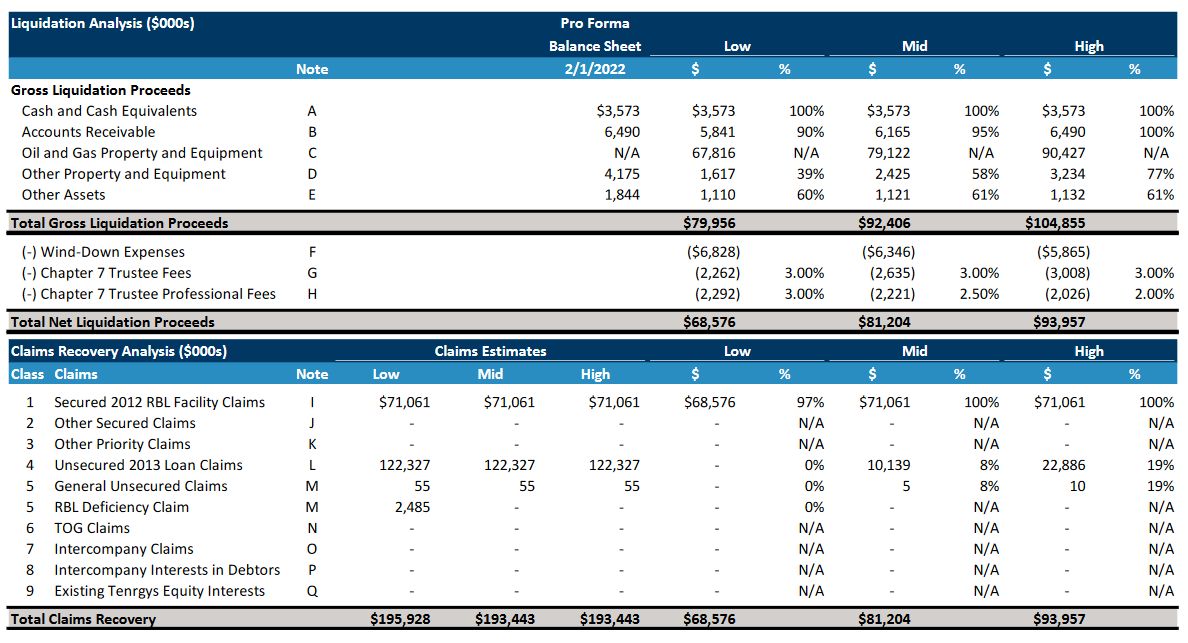 According to the Debtors: “The Debtors operate an independent oil and natural gas business. Headquartered in Ridgeland, Mississippi, as of September 1, 2021, the Debtors had 11 productive fields and fieldwide units in Mississippi and Louisiana.