On April 15th, the Debtors filed a Second Modified Second Revised Disclosure Statement and a related redline showing changes from the version filed on April 9, 2021 [Docket Nos 3929 and. 3936, respectively]. In addition to reflecting the Plan changes described below, the revised Disclosure Statement attaches a commitment letter in respect of proposed exit financing (Exit Term Loan Facility and Exit Revolving Facility) and, in its continuing battle against the "purported" Ad Hoc Committee of Shareholders (the “Equity AHG”), a price history for its equity and debt.

Unsurprisingly perhaps, the Debtors do not turn to the filed charts (bonds trading at par…and even above) or the pesky equity to bolster their arguments, but rather to their valuation analysis and "an open and competitive process for the sale of the equity in the Reorganized Debtors" (albeit a process occuring largely after the Debtors filed for Chapter 11 protection and punctuated by a now infamous attempt to issue $1.0bn of  "insolvent" equity after seeking that protection).

Most notable amongst changes in this latest iteration of the Plan is the proposed recovery for general unsecureds in Class 7, which has been moderately increased. That class is now set to share a recovery pool comprised of a $448.54mn "General Unsecured Recovery Cash Pool Amount" (this up from $410.24) and the potential proceeds of certain "Specified Causes of Actions" (see further below) with recoveries capped at 82% [up from 75%]. As a result, the Debtors' official committee of unsecured creditors (the "Committee"), which also benefits from a number of drafting changes relating to consultation rights and the appointment/control of the "GUC Oversight Administrator," is now supportive of the Plan.

Up next for the Debtors (who received Plan exclusivity extensions on April 14th), is an April 16th hearing to consider adequacy of the Disclosure Statement. In a filing in advance of that hearing [Docket No. 3924], the Debtors once again asked the Court to brush aside the persistent objections of the Equity AHG who argue that equity is "in the money" and that the Debtors are in fact solvent.

The Debtors argue: "The Equity AHG bases its objection on the unsupported notion that the Debtors are solvent, rendering the Plan unconformable [sic] because it returns no value to the Debtors’ existing equity holders. In addition to providing no evidence to support its solvency claim (and thus conceding that the information in the Disclosure Statement provides adequate disclosure), the Equity AHG ignores that courts have consistently held that valuation disputes are properly resolved only at confirmation and not at the disclosure statement stage."

In urging the Court to allow it to proceed towards Plan solicitation with haste, the Debtors implicitly acknowledge why the Equity AHG is not likely to abandon its efforts. The Debtors continue: "…it remains critical that the Debtors continue to move their plan process forward, and expeditiously. The now ‘hot’ equity and debt markets which have provided the billions of committed financing needed to fund the Debtors’ restructuring may turn ‘cold’ with the passage of time."

Hot equity markets, but not so hot as to leave anything on the table for equity.

The Debtors' omnibus reply in support of Disclosure Statement approval [Docket No. 3924] provides a useful, up-to-the-minute summary: "Since filing their initial chapter 11 plan and disclosure statement more than a month ago, the Debtors and their professionals have continued to work to develop, build consensus around, and enhance a plan that maximizes value. As a result, the Debtors are now poised to commence solicitation (and are seeking this Court’s authority to do so) of an amended plan that is supported by the Official Committee of Unsecured Creditors (the ‘Committee’) and incorporates a fully committed proposal to invest $2.57 billion of equity capital by Centerbridge Partners, L.P., Warburg Pincus LLC, Dundon Capital Partners, LLC, and an ad hoc group of holders of more than 85% of the Debtors’ Unsecured Funded Debt (together, the ‘Plan Sponsors’). The Plan would pay senior claims in full, deliver substantial cash recoveries to the Debtors’ general unsecured creditors, and provide the Debtors’ unsecured debtholders with common equity in the Reorganized Debtors and Subscription Rights to purchase additional common equity. The Debtors would emerge from Chapter 11 with a significantly delivered balance sheet, including no corporate debt on their European businesses and $1.3 billion of corporate term loan debt, and a new ABS facility to fund the purchase of new vehicles for use in their U.S. rental car business.

The Plan and the widespread consensus support for it are products of an open marketing process in which the Debtors have dealt with all interested parties. As is evident from the change in proposed sponsorship since the initial version of the Plan was filed, the Debtors have not 'played favorites,” and instead have successfully pushed potential sponsors to deliver the best proposals possible. With all of that said, it remains critical that the Debtors continue to move their plan process forward, and expeditiously. The now “hot” equity and debt markets which have provided the billions of committed financing needed to fund the Debtors’ restructuring may turn “cold” with the passage of time. Furthermore, the Debtors must continue to build momentum to exit chapter 11 during the busy summer season and avoid a potential loss in value that could occur through an extension of these Chapter 11 Cases. Indeed, although the Debtors have successfully worked to build value using the tools of chapter 11, delays in emergence may negatively impact the Debtors’ bookings, harm the Debtors’ customer and vendor relationships, and interfere with the Company’s ability to acquire necessary fleet for 2022. The Debtors therefore remain focused on a targeted June exit from chapter 11."

Under the Plan, the Reorganized Debtors will issue new Reorganized Hertz Parent Common Interests, as follows (subject to dilution from the Preferred Stock, the issuance of additional shares resulting from increases in ALOC Facility Claims as described in the Rights Offering Procedures and equity reserved or granted under the Management Equity Incentive Plan):

The Plan also provides for the Reorganized Debtors to obtain a $1.3 billion senior secured term loan to fund Plan distributions and a $1.5 billion revolving credit facility to fund their working capital needs.

The funds generated by these transactions will be used, in part, to provide the following distributions to creditors:

The Debtors will emerge from chapter 11 protection with approximately $2.3 billion in global liquidity (inclusive of capacity under the Exit Revolving Credit Facility) and only $1.3 billion in corporate debt (exclusive of ABS facilities and letters of credit). The Debtors believe that such liquidity is sufficient to fund their operations after emergence and will provide them with the financial strength and flexibility required to successfully execute their business plan.

Finally, the transactions contemplated by the Plan include the payment in full of the notes issued by non-Debtor Affiliate HHN and an injection of Cash prior to the Effective Date to meet the liquidity needs of the Debtors’ European business. Specifically, as part of their agreement to sponsor the Plan, certain of the Plan Sponsors have agreed to provide an approximately $295 million (or approximately €250 million if denominated in euros) interim facility to fund the European businesses’ immediate cash needs. The Plan provides that such facility will be repaid upon the Effective Date. The Debtors believe that, upon emergence, their European business will be well positioned for success.

The Debtors believe that the Plan accomplishes all of the goals that they sought to achieve by commencing the Chapter 11 Cases. If consummated, the Plan will significantly reduce the Debtors’ leverage, provide the Debtors with sufficient cash to run their businesses, and provide recoveries to unsecured creditors significantly in excess of what creditors would receive in a liquidation of the Debtors if the Plan were not consummated. The Debtors urge all Holders of Claims entitled to vote on the Plan to vote to accept the Plan.”

The following is an updated summary of classes, claims, voting rights and expected recoveries (defined terms are as defined in the Plan and/or Disclosure Statement; see changes in bold; See also the Liquidation Analysis below):

The modified Disclosure Statement [Docket No. 3929] attached the following exhibits:

Liquidation Analysis (See Exhibit F to Disclosure Statement [Docket No. 3929], NB: this is first of four pages with each page beginning (as here) with consolidated group figures and then adding a debtor-by-debtor breakdown) 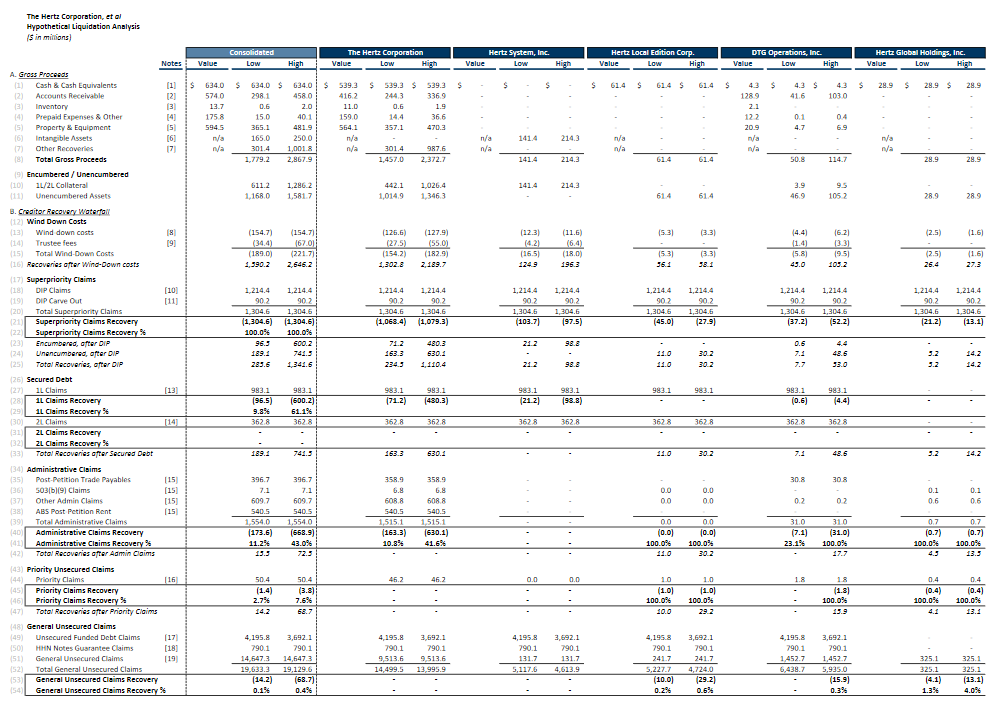