May 12, 2021 – Further to the conclusion of a 36-hour auction and the designation of a private equity group comprised of Certares Opportunities LLC (“Certares”), Knighthead Capital Management, LLC (“Knighthead”) and Apollo Capital Management, LP (“Apollo”) as the successful bidder and now Plan sponsors (the "Plan Sponsors"), the Debtors have moved quickly to file revised Plan documents in advance of a hearing scheduled for May 14th at which they will ask to have the auction results blessed.

Filed documents include (i) a Third Amended Plan and a related blackline [Docket Nos. 4667 and 4668, respectively], (ii) a motion to approve the new Plan Sponsor and Disclosure Statement Supplement [Docket No. 4670, which attaches the Disclosure Statement Supplement; the May 12, 2021 Modified Equity Purchase and Commitment Agreement; and Modified Rights Offering Materials) and (iii) the notice of selection of successful bidder [Docket No. 4666 which also attached the EPCA and preferred stock term sheet, the partially redacted Apollo engagement letter, and a schedule of direct equity and rights offering backstop commitments beginning on p.260].

Also filed were a pair of substantially identical declarations (filed by investment banker Moelis and Hertz Director Vincent J. Intrieri at Docket Nos. 4675 and 4672, respectively), in support of the Debtors' motion to approve the Plan Sponsors which provide some background on how the auction unfolded and the methodology for choosing a winning bid. Neither declaration provides any insight on the mindset of the losing private equity/noteholder group (ie, Centerbridge Partners L.P., Warburg Pincus LLC, Dundon Capital Partners LLC and an ad hoc group of holders of more than 85% of the Debtors’ Unsecured Funded Debt, together, the “CWD Group”) at the conclusion of the auction.

The Debtors have yet to file an 8-K and their press release of May 12th is summarized below.

If a last minute objection were to emerge (the agenda for the May 14th hearing for the moment notes none), it would likely relate to arguments that the auction was prematurely closed and that the Plan Sponsors' winning "last and final" bid was largely the result of the attenuated shareholder recovery provided by a last minute extension of a warrant package from 10 to 30 years (to which Moelis attributes the lion's share of the winning margin, see below) and a rather fuzzy inclusion of "synergistic value from Amex GBT and other portfolio companies of the Plan Sponsors." Amex GBT is American Express Global Business Travel, a joint venture between American Express and a group of investors led by Certares.

The CWD Group may, however, be content to walk away with a $77.2mn break-up fee (plus expenses) and 100% recoveries in respect of any debt positions held (significantly noteholders holding $2.75bn had previously been projected to recover 75%).

The Moelis declaration states: "Over a continuous, approximately 32-hour period on May 10 and 11, 2021, the Debtors held an auction to select the sponsor for their plan of reorganization….The auction involved a total of three rounds of competitive bidding, with each of the prospective plan sponsor groups submitting two overbids, and then a third bid constituting its best and final offer.

Comparison of Best and Final Offers from Prospective Plan Sponsors (see the Moelis declaration [Docket No. 4675] for bid-by-bid detail)

The Disclosure Statement Supplement (attached to Docket No. 4670, p.65), provides the post-auction state of play. It should be noted that the Debtors continue to highlight the possibility that the Plan and Plan sponsor could still change and, at least until the Court issues a requested order closing the window for objecting (4pm EST on May 13th), a challenge to the auction results remains a possibility.

The Plan contemplates a recapitalization of the Debtors through a combination of the issuance of new debt and equity capital, and treatment of existing Claims against and Interests in the Debtors pursuant to the Plan.

Under the Plan, the Reorganized Debtors will issue new Reorganized Hertz Parent Common Interests, as follows (subject to dilution from equity reserved or granted under the Management Equity Incentive Plan and issuable upon exercise of New Warrants):

The transactions set forth in the Plan will raise approximately $7.216 billion in Cash proceeds, comprised of the following approximate amounts:

The funds generated by these transactions will be used, in part, to provide the following distributions to Holders of Allowed Claims:

The following is an updated summary of classes, claims, voting rights and expected recoveries (defined terms are as defined in the Plan and/or Disclosure Statement; see changes in bold; See also the Liquidation Analysis below): 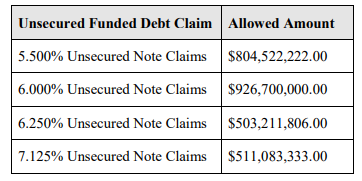 A May 12th press release announcing the selection of the plan Sponsors stated: "Under the revised proposal, Hertz's Chapter 11 plan will be funded through direct common stock investments from the KHCA Group and certain co-investors aggregating $2.781 billion, the issuance of $1.5 billion of new preferred stock to Apollo and a fully backstopped rights offering to the Company's existing shareholders to purchase $1.635 billion of additional common stock. The revised Plan would provide for the payment in cash in full of all administrative, priority, secured and unsecured claims in the Chapter 11 cases and would deliver significant value to the Company's existing shareholders including:

The press release expounds on the competitive bidding process that ultimately resulted in the selection of the KHCA Group proposal, stating "two investor groups have been competing to fund Hertz's Chapter 11 exit. On April 21, the Bankruptcy Court overseeing Hertz's Chapter 11 cases authorized Hertz to begin soliciting votes on its Chapter 11 plan and approved a group consisting of Centerbridge Partners L.P., Warburg Pincus LLC, Dundon Capital Partners, LLC and an ad hoc group of the Company's unsecured noteholders (collectively, the 'CWD Group') as the sponsors of the Plan.

When it became apparent that the competition to sponsor the Company's Plan would continue, the Company sought and obtained Court approval of bidding procedures and an auction process to ensure that it received the highest and best sponsorship proposal within a timeframe that would permit the Company to continue working toward a planned exit from Chapter 11 by June 30, 2021. A robust competition between the CWD Group and the KHCA Group ensued, concluding with the selection of the revised KHCA Group's proposal late yesterday following the auction.

As with the CWD Group's previous proposal, the KHCA Group's proposal would eliminate approximately $5.0 billion of corporate debt (including the complete elimination of all corporate debt on Hertz's European business) and provide the Company with over $2.2 billion of global liquidity. The KHCA Group's proposal would also replace the bridge financing previously provided by the CWD Group to fund the Company's European fleet needs prior to the Plan's consummation. The debt funding commitments for Hertz's Chapter 11 plan, which were approved by the Court earlier this week, will remain in place under the KHCA Proposal."

Paul Stone, Hertz's President and Chief Executive Officer, commented in the press release, "We are very pleased that our Plan process produced such a tremendous result for our creditors and shareholders. We appreciate the strong interest in Hertz from the competing Plan sponsors and thank them for their active engagement, which provided us with excellent options for our exit from Chapter 11. We look forward to working with the KHCA Group to complete the remaining steps in our restructuring and best position Hertz for the future.

Our proposed Plan provides a robust recovery and excellent value for all of our stakeholders and enables Hertz to emerge as a much stronger, more competitive company. During our restructuring, we have made material improvements in our operational efficiency and have built added cost discipline into our business. Now, we look forward to implementing our Chapter 11 plan, which will substantially strengthen our financial structure by eliminating 79% of our corporate debt. We are well-positioned to take advantage of increasing global travel demand and new long-term growth opportunities. We are excited about Hertz's future and the benefits for all of our stakeholders – including our employees and customers as well as our investors, franchisees and business partners."

The proposed deal with the KHCA Group is reflected in definitive documents executed by the Plan sponsors, including (1) an Equity Purchase and Commitment Agreement, (2) a Plan Support Agreement, (3) a Bridge Financing Commitment for Hertz International Ltd. and (4) an Amended Chapter 11 Plan of Reorganization. The Debtors said these documents, together with an amended Disclosure Statement, were expected to be filed with the Bankruptcy Court later Wednesday.

If the Bankruptcy Court approves the revised agreements at a hearing scheduled for May 14, 2021 (at which the Debtors will also seek approval of any necessary changes to the Plan and solicitation procedures), Hertz said it "would terminate its agreements with its existing Plan sponsorship group (which remain in effect) and execute the new agreements with the KHCA Group."

A hearing to confirm the Debtors' Plan of Reorganization is scheduled for June 10, 2021.

Liquidation Analysis (See Exhibit F to Disclosure Statement [Docket No. 4100], NB: this is first of four pages with each page beginning (as here) with consolidated group figures and then adding a debtor-by-debtor breakdown) 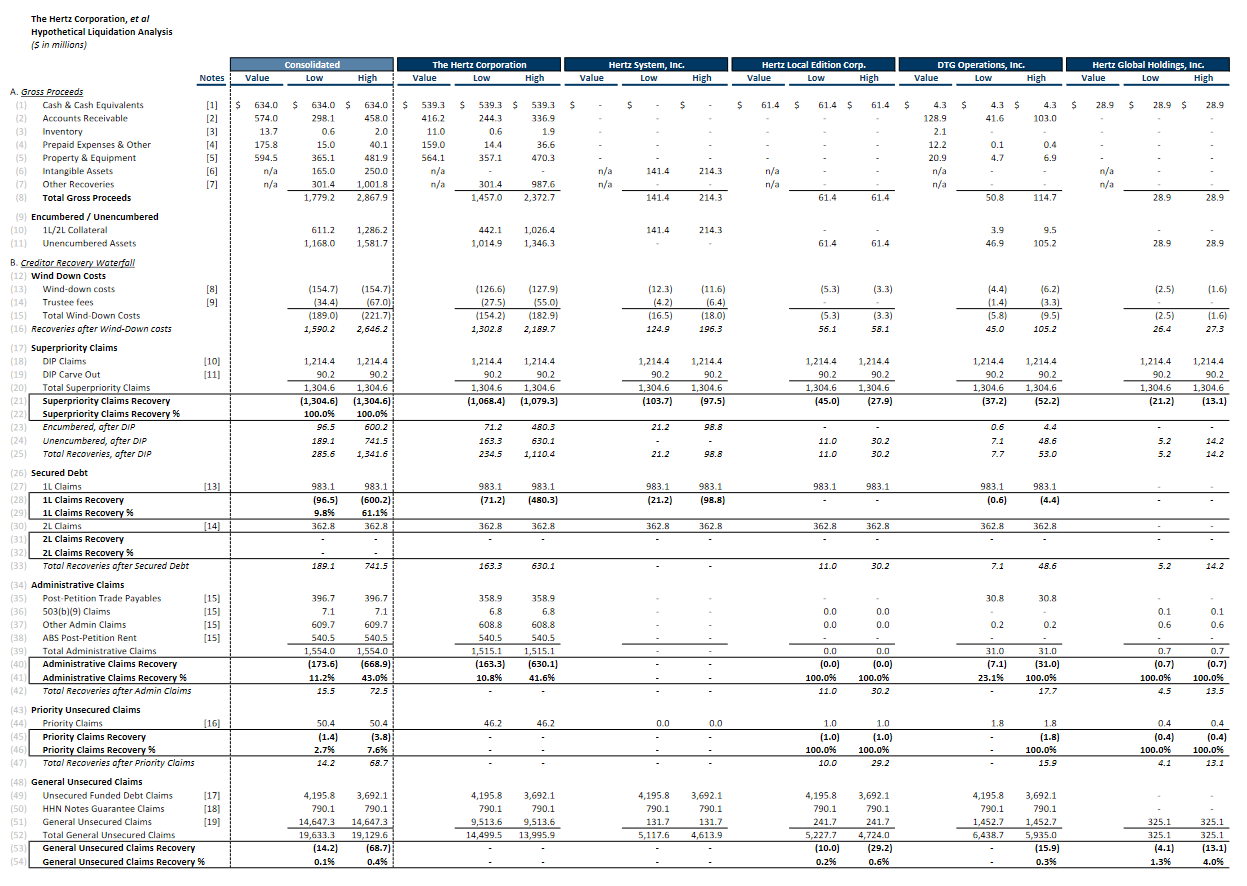