November 5, 2020 – The Debtors have filed a motion requesting Court authority to enter into a new $4.0bn ABS facility (the “Interim Facility”) with Apollo Capital Management, L.P. (“Apollo”); with funds made available under the facility to be used to fund the purchase of vehicles during the Debtors' stay in Chapter 11 [Docket No. 1698]. The Debtors' current fleet plan anticipates the purchase of up to 229,000 new and used vehicles, including from OEMs, with these purchases necessitating up to $4.0bn billion of further borrowing during 2021. The Debtors' earlier-approved $1.65bn debtor-in-possession ("DIP") facility included $1.0bn earmarked for vehicle purchases and the Debtors also have a new $400.0mn fleet financing facility for Debtor Donlen Corporation. Numerous Apollo entities are signatories to the DIP facility commitment letter and Apollo's interest in (and connections with) the Debtors predates the Chapter 11 filings, with Apollo raising eyebrows in May 2020 when it began buying credit default swaps in respect of Hertz debt.

The motion attaches an October 31st Commitment Letter amongst the Debtors and Apollo (the "Parties") which in turn attaches an Interim Facility term sheet. Also attached are an Engagement Letter which notes a redacted "Structure Fee" and a Fee Letter which notes a redacted "Commitment Fee."  Amongst fees that are disclosed (see further below) is a 0.5% upfront fee (ie $20.0mn).

The Interim Facility will replace prepetition ABS facilities that were terminated as a result of the Debtors’ Chapter 11 filings; those filings constituting “amortization events” in respect of those prepetition ABS facilities and effectively shutting a critical source of vehicle financing from the Petition date. The earlier ABS facilities continue to provide some utility (if not utility vehicles), with "pre-existing structures that the Debtors have created in connection with past ABS facilities [serving]…to reduce transaction and other costs" in respect of the administration of the replacement facility."

The Debtors go to lengths to stress that this facility is not a standard debtor-in-possession ("DIP") facility in that the borrower (Hertz Vehicle Interim Financing, LLC  or “HVIF” which will own the vehicles) is a bankruptcy remote, special purpose non-Debtor and that none of the Debtors' assets will be used to support money borrowed under the Interim Facility. The Interim Facility will sit silo-ed from the Debtors' estates and the Debtors "only request that the Court authorize THC and certain other Debtor affiliates to enter into and perform under certain ancillary transaction documents required in connection with the Interim Facility, including a 'Master Lease Agreement,' and the other “Debtor Facility Documents” ….Pursuant to such transaction documents, THC and certain other Debtors will lease the vehicles acquired by HVIF and provide, on customary terms, certain servicing and collateral services to HVIF."

On October 29th, the Court gave the Debtors the go ahead to access the $1.65bn DIP facility over a strenuous objection from the Debtors' Official Committee of Unsecured Creditors who will clearly be poring over these new arrangements looking for any sign that the arrangements have more impact on the Debtors' estates than the Debtors acknowledge.

The Debtors motion [Docket No. 1698] states: "As described in the First Day Declaration, the Debtors commenced these Chapter 11 Cases (as defined below) in the midst of the COVID-19 pandemic, which has had a devastating effect on the travel sector. The Debtors have been operating as debtors-in-possession for approximately six months, during which time they have made strides toward stabilizing their business by reducing the fleet size to better match demand, reducing expenditures, right-sizing their locations, and rejecting unprofitable contracts.  For 2020, the Debtors have also negotiated  a settlement in respect of their existing vehicle lease payments, obtained $1.65 billion in debtor- in-possession financing, and entered into a new $400 million fleet financing facility for Debtor Donlen Corporation.

In order to strengthen their business operations and remain competitive in the vehicle rental market during 2021, the Debtors must have the ability to obtain new and used vehicles needed to refresh their fleet to maintain the appropriate vehicle age and mileage to meet customer demand and reduce the operational expenses that accompany utilizing an older fleet. Without the ability to acquire additional vehicles, the Debtors will be unable to maintain the high levels of customer satisfaction that they have achieved or their status as an industry leader.

With those goals in mind, the Debtors have developed a fleet plan for 2021 that provides for a newly-created non-Debtor bankruptcy remote special purpose entity to purchase a substantial number of new and used vehicles throughout the year, with new vehicle deliveries commencing in the first quarter of 2021. The Debtors must place their orders for new vehicles as soon as possible to secure both the number and mix of vehicles needed from the various manufacturers (the “OEMs”) to maintain a robust fleet. Indeed, many OEMs require that orders for vehicles be placed as early as the middle of November (i.e. this month) to ensure delivery of vehicles during the first half of 2021 and there is reasonable concern that OEMs will require evidence of fleet financing to place firm orders. Accordingly, it is critical for the Debtors to obtain approval for their obligations in connection with new fleet financing as soon as possible."

Prior to the Petition Date, the Debtors financed their fleet purchases through an asset-backed securitization (“ABS”) facility. In short, The Hertz Corporation (“THC”) created a wholly-owned bankruptcy remote special purpose entity, Hertz Vehicle Financing II LP (“HVF II”), which THC funded with a predetermined amount of equity or subordinated debt.  Thereafter, HVF II obtained financing from third parties by selling notes and used the proceeds of those notes, along with the equity or subordinated debt provided by THC, to finance the purchase of vehicles by a different wholly-owned bankruptcy remote special purpose entity, Hertz Vehicle Financing LLC (“HVF”), through an intercompany note between HVF II and HVF. HVF would then lease those vehicles to certain of the Debtors. The Debtors rented the vehicles leased from HVF to customers, generating the revenue required to make lease payments under the master lease agreement with HVF and providing the funds necessary for HVF to satisfy its obligations to HVF II under the intercompany note and for HVF II to satisfy its obligations under the notes it issued. The notes issued by HVF II were collateralized, among other things, by the vehicles purchased and owned by HVF.

The motion provides: "To implement their interim financing strategy, the Debtors began an exhaustive three-month process to obtain the most favorable terms possible for the Interim Facility. The Debtors and their advisors contacted thirty-eight (38) parties regarding the potential Interim Facility, obtained eleven (11) proposals in the form of term sheets from multiple lending sources and, after lengthy and vigorous arms’ length negotiations with at least four (4) parties, determined that a committed proposal from Apollo Capital Management, L.P. ('Apollo') was the most favorable to the Debtors. A copy of an executed commitment letter (the 'Commitment Letter') with an affiliate of Apollo, Athene USA Corporation (“Athene” and together with all other lenders under the Interim Facility, the 'Proposed Lenders'), is attached hereto  as Exhibit B. The Commitment Letter includes a detailed term sheet (the 'Term Sheet'). The terms of the Interim Facility will be in form and substance consistent with the Term Sheet, or, if not addressed in the Term Sheet, consistent with the documentation for Hertz Vehicle Financing II LP, Series 2013-A (the 'HVF II Documentation'), or, if not contemplated by the Term Sheet or the HVF II Documentation, as reasonably satisfactory to the Proposed Lenders and THC."

the undrawn fee rate based on the table below; and

(b) the excess, if any, of the Maximum Principal Amount over the outstanding principal amount of the Loans, and 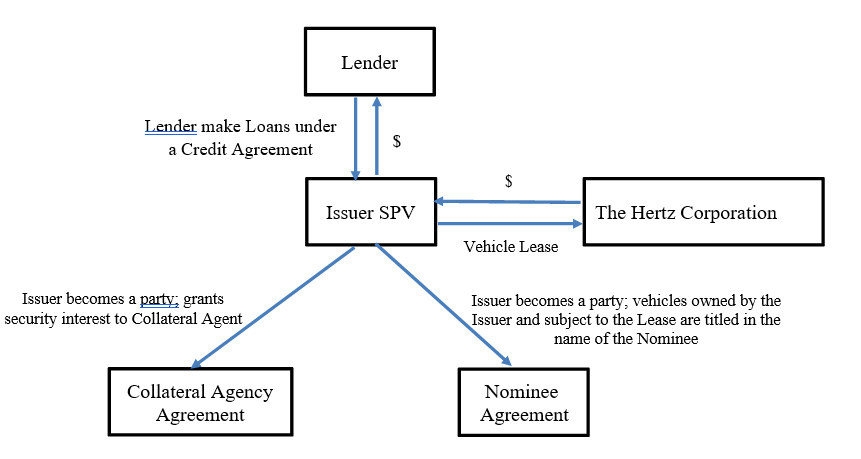