February 16, 2022 – As directed by the Court at a January 28th hearing, the Debtor has now filed an amended Plan of Liquidation and a related Disclosure Statement [Docket No. 377 and 378, respectively, which do not attach blacklines].

Judge Harwood's order followed objections filed by various creditors urging the Court to send the Debtor “back to the drawing board” in respect of their Plan and Disclosure Statement; with alleged shortcomings including inadequate information and the impermissable combining of the Plan and Disclosure Statement into a single document. Creditors are also objected to the Debtor's proposal to make a $24.7mn interim payment of asset sale proceeds to bond trustee UMB Bank ($93.0mn of revenue bonds issued in 2017) and to treatment which does not leave them in better shape than they would be in Chapter 7, which is exactly where the Debtor should be according to several of its creditors.

Adding to the Debtor's list of Disclosure Statement-related headaches was an objection from the U.S. Trustee assigned to its case as to proposed third-party releases and an opt-out mechanism for those releases.

Clearly now the combined document has been divided into its separate Plan and Disclosure Statement elements. In addition, the Disclosure Statement now adds a Plan Summary (see below) and a new Class 7 comprised of trade creditors who are to receive an estimated 8% recovery.

Unchanged is the Debtor's proposed "interim distribution to the Bond Trustee on account of the Bond Claim in the amount of $24,737,796.06 from the Net Sales Proceeds" which is to be considered at the Debtor's March 7th Disclosure Statement hearing.

The separate Disclosure Statement [Docket No. 378] now adds: “The Debtor believes that the Plan is in the best interest of the Debtor’s creditors, residents, employees, and other parties in interest. In short, the Plan contemplates the following:

The following is an amended summary of classes, claims, voting rights and expected recoveries, changes highlighted in blue (defined terms are as defined in the Plan and Disclosure Statement): 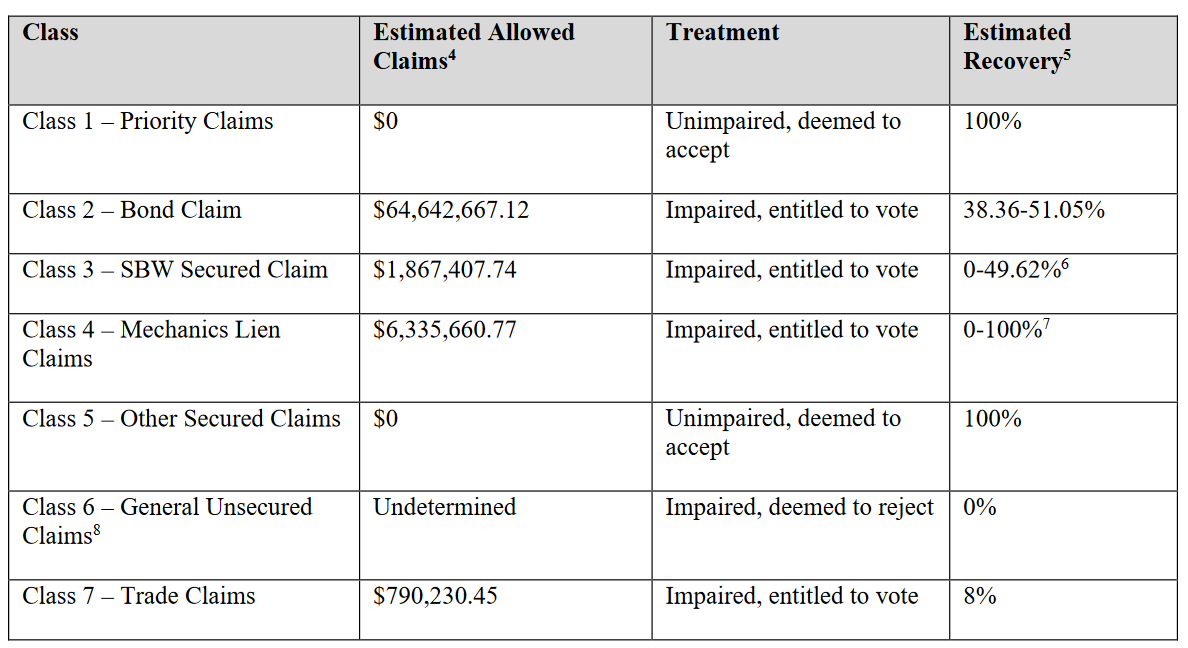 On August 30th, The Prospect-Woodward Home (dba Hillside Village Keene, “Prospect-Woodward” or the “Debtor") filed for Chapter 11 protection noting estimated assets between $10.0mn to $50.0mn; and estimated liabilities between $50.0mn and $100.0mn. At filing, the Debtor, which operates an assisted living home in Keene, NH, cited "the discovery of significant construction defects upon the opening of its new facility coupled with the governmental emergency orders resulting from the COVID-19 global pandemic" as leaving it "unable to achieve its marketing goals and generate sufficient revenue from the sale of life care contracts to fulfill its obligations under its long-term tax-exempt bond indebtedness…" and hence necessitating bankruptcy protection.

On November 22, 2021, the Court hearing the Prospect-Woodward Home case issued an order approving a $33.0mn sale of substantially all of the Debtor’s asset to Covenant Living Communities and Services (the “Purchaser” or “Covenant”) [Docket No. 317].

On November 1, 2021, further to a September 21st bidding procedures order [Docket No. 206], and absent any qualified bids beyond that of Covenant, the Debtor notified the Court that it had cancelled a November 3rd auction and named Covenant as the Successful Bidder [Docket No. 282].

The Purchaser describes itself as “one of the largest not-for-profit retirement living organizations in the nation, with 16 communities in nine states.”

As of the Petition Date, the Debtor owes a total of approximately $96,856,450.46 consisting of bond obligations, construction loan obligations and unsecured obligations (collectively, the “Debt Obligations”).

As detailed in the First Day Declaration, prior to the Petition Date, MacMillin Company, LLC ('MacMillin') and (collectively, the 'Mechanics Lienholders') and the Debtor were involved in construction related litigation in the Cheshire County Superior Court of New Hampshire (the 'State Court'). On October 25, 2019, the State Court issued an opinion for attachment purposes pursuant to N.H. REV. STAT. ANN. ('RSA') § 447:12 for the Mechanics Lienholders in the aggregate amount of $6,335,660.77 (the 'Aggregate Mechanics Lienholder Claim').

During the Chapter 11 Case, certain Mechanics Lienholders have alleged that their security interests are superior to that of the Bond Trustee. The Bond Trustee and the Debtor have disagreed. Additionally, the Debtor believes the Aggregate Mechanics Lienholder Claim is subject to offsetting claims for construction defects in the amount to $3,000,000."

The interim distribution  motion further states, "The Debtor and [asset purchaser] Covenant anticipate that the Closing Date will occur by February 1, 2021. However, regardless of when the Closing Date occurs, the Debtor requests that that the Court authorize the Interim Distribution of $24,737,796.06 on account of net sale proceeds which the Bond Trustee has an undisputed first priority lien on, which shall be applied by the Bond Trustee to reduce the allowed Bond Claim:

The allowed Bond Claim of $64,642,667.12 far exceeds the Purchase Price of $33,000,000. While the Debtor believes that the Bond Trustee has a valid first priority on substantially all of the Debtor’s assets, the Bond Trustee has agreed to temporarily leave approximately $8,262,203.94 in the Debtor’s estate (the ‘Reserve’) to fund a plan process and on account of claims by SBW and the Mechanics Lienholders. The Reserve will maintain the status quo while the Court determines the relative priority of the claims of the Bond Trustee, SBW and the Mechanics Lienholders.

Therefore, the Debtor submits it is a valid exercise of its business judgment to make the Interim Distribution to the Bond Trustee on the Closing Date”. 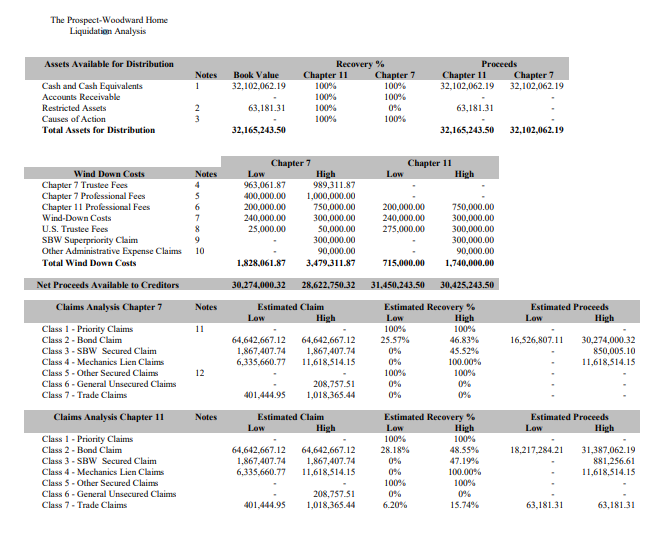 Voyager Digital Holdings, Inc. – Court Rules that Crypto-Currency Broker Can Return Customer Cash (Given It Is Not Estate Property) with Consideration as to Ownership of Cryptocurrency Assets Deferred