In a press release announcing the filing, the Debtors advised that: “…the Prepackaged Plan follows on a Restructuring Support Agreement (the 'RSA') with the significant majority of holders of the Company's first and second lien secured loans, along with other supporting parties. The Prepackaged Plan has the support of holders of 98.6% in principal amount of the Company's first lien secured loans and 93.8% in principal amount of its second lien secured loans….TNT expects to emerge from chapter 11 proceedings within 55 days with a stronger capital structure.”

The Disclosure Statement (mailed to voting creditors on August 7th) provides: "The Debtors and their non-Debtor subsidiaries will, in accordance with the Restructuring Support Agreement, implement financial restructuring transactions (the “Restructuring Transactions”) that will eliminate approximately $665 million of principal indebtedness from their balance sheet and provide the Debtors and Reorganized Debtors at least $225 million of new financing.

…the Restructuring Transactions provide for a comprehensive restructuring of a significant portion of the Claims against and Interests in the Debtors. If the Restructuring Support Agreement is implemented through the Chapter 11 Cases [now the case], then the restructuring will take place on the In-Court Effective Date (as defined below) by

(i) distributing to Holders of First Lien Loan Claims their pro rata share of a combination of (a) new term loans (the “Exit Take Back Term Loans”) under the new senior secured term loan facility (the 'Exit Take Back Term Loan Facility') in an aggregate principal amount equal to $100 million; and (b) 97% (subject to dilution by the MIP and New Warrants) of the common stock, limited liability company membership units, or functional equivalent thereof issued by Reorganized TNT to be authorized, issued and outstanding on and after the Effective Date ('New Common Stock');

(iii) distributing to the Sponsor Lender, on account of the Sponsor Term Loan Claims, New Warrants that can be exercised for up to 1% of the New Common Stock (subject to dilution by the MIP).

Other than the Holders of the First Lien Loan Claims, the Second Lien Term Loan Claims and the Sponsor Term Loan Claims (who overwhelmingly support the Plan pursuant to the Restructuring Support Agreement), the Debtors’ other creditors (including employees, vendors, and Holders of general unsecured claims) will be paid in full or otherwise receive such treatment to render them unimpaired."

The Disclosure Statement provides: "The Debtors’ capital structure was put in place in 2013. As a result of substantial exogenous challenges, such as the decline of oil prices and the resulting reduction in activity in the oil & gas end market, the Company’s operating performance has been weaker than was expected at the time the debt was incurred, causing TNT to become overleveraged. Over the last several years, the Company has responded to these challenges by diversifying its customer base and geographies through acquisitions and operational changes (including through the 2015 acquisition of RMS, one of the largest crane and rigging services companies in the Rocky Mountain region). In addition, in 2018, the Company received incremental equity investments from the Sponsor and management, and extended the maturity under its First Lien Revolving Facility from 2018 to 2020. However, these steps, while substantially improving the performance and liquidity of the Company, did not address the coming maturity of the bulk of TNT’s debt obligations in 2020—in the next four months, $466 million of the Company’s debt obligations will mature.

With the economic consequences of the COVID-19 pandemic quickly exacerbating the Company’s already tenuous financial position, the Company engaged Stifel’s restructuring affiliate Miller Buckfire and financial advisor FTI in early March. These advisors, along with Company counsel, Simpson Thacher & Bartlett LLP, began to explore both in-court and out-of-court strategic alternatives with the Company.

In March 2020, with the COVID-19 pandemic impacting both refinancing efforts and business operations, it became clear that the Company would be unable to remain in compliance with both of its Credit Agreements without a waiver or forbearance from one or both of the ad hoc groups. After extensive negotiations with both ad hoc groups, the Company entered into a forbearance agreement with the Ad Hoc Cross-Holder Group on April 7, 2020 in respect of certain events of default that would have occurred under the Second Lien Facility as of the expiration of a five business day grace period that began on March 31, 2020 (the 'Second Lien Forbearance Agreement'). Concurrently with the execution of the Second Lien Forbearance Agreement, the Company also closed certain sale-leaseback transactions which provided the Company with incremental liquidity and allowed it to make certain payments due under its First Lien Credit Agreement, thereby remaining in compliance with the terms of that agreement."

The following is a summary of classes, claims, voting rights and expected recoveries (defined terms are in the Plan and/or Disclosure Statement; see also the liquidation analysis below):

On August 23, 2020, the Debtors' claims agent notified the Court of Plan voting results which were as follows [Docket No. 17]:

Exhibits attached to the Disclosure Statement [Docket No. 16]:

According to the Debtors: "TNT is a crane services platform that provides operated and maintained ("O&M") crane services and comprehensive lifting services to a broad customer base across multiple sites, with a diversified end market exposure.  As a provider of O&M services, the Company supplies its customers with highly skilled operators, technical expertise and project engineering and design in connection with its lifting services."

The Disclosure Statement adds: "As of August 7, 2020….the Company controls nearly 700 cranes in 41 regional branches, servicing more than 4,000 customers. It offers several crane types to meet its customers diverse needs, including truck cranes, all-terrain cranes, rough-terrain cranes, tower cranes and crawler cranes. The crane fleet is young, with an average fleet age of less than 10 years compared to a typical total life for a crane of 25- 40 years. 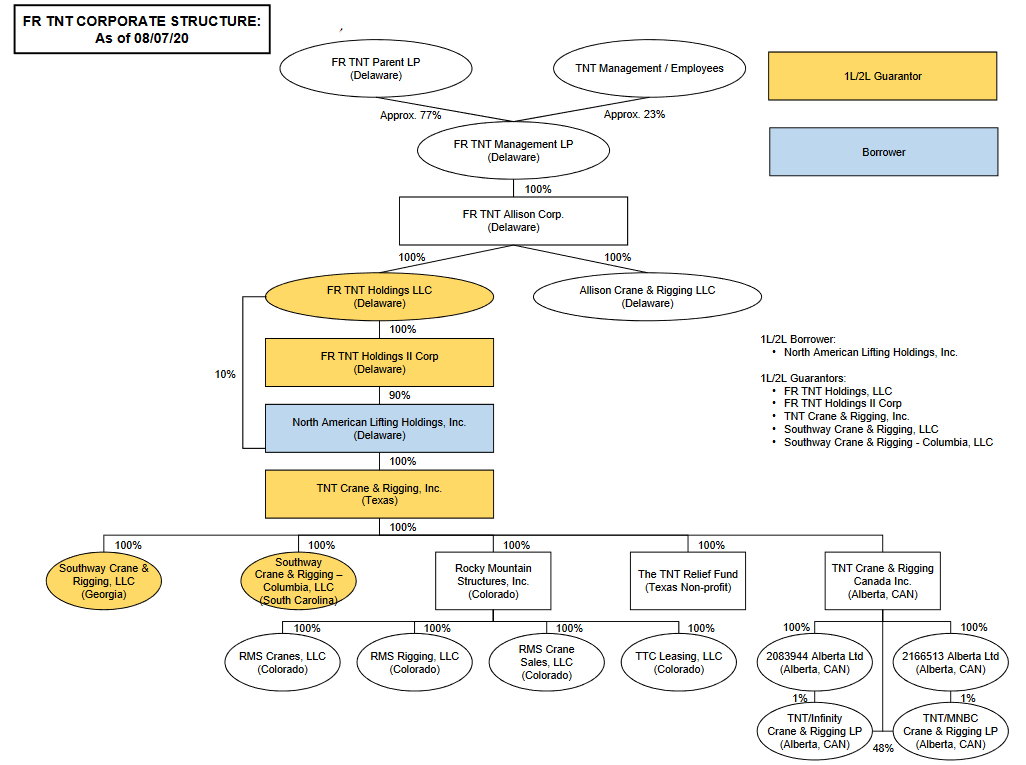 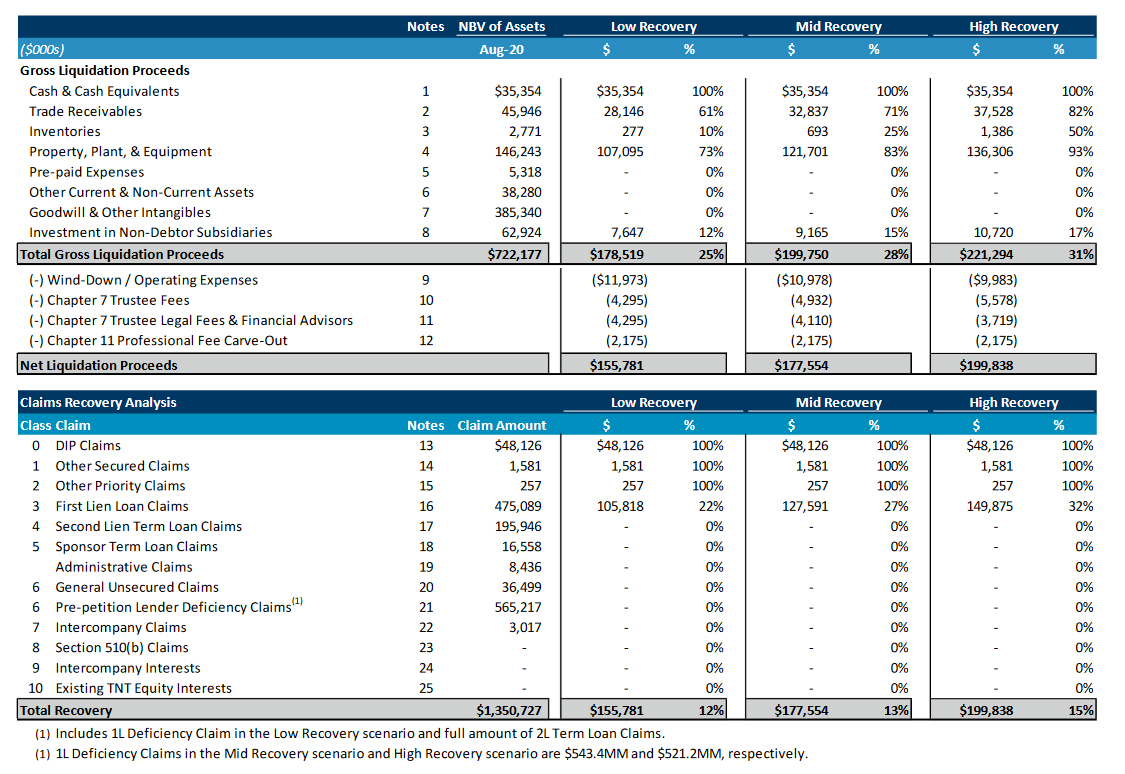 Crestlloyd, LLC – Developer of Los Angeles Mega-Mansion “The One” Seeks $12mn of DIP Financing to See it Through Sale Process