December 18, 2020 – The Court hearing the Town Sports International cases issued an order confirming the Debtors' Second Amended Joint Plan of Liquidation [Docket No. 828]. The Plan's confirmation comes notwithstanding the Debtors' failure to garner the support of their prepetition term loan lenders who have unusually now been crammed down by the Plan's only other voting class, with that class comprised of general unsecured creditors who are receiving a (less than) 1% return. As discussed further below, the Debtors stress that the dissenting term loan lenders were acting in "breach of their obligations under the Settlement Agreement to support and vote for the Plan," a settlement agreement which "this Court has already ruled is binding on the Term Loan Group."

On September 13, 2020, Town Sports International, LLC and 161 affiliated Debtors (“Town Sports” or the “Debtors”) filed for Chapter 11 protection with the U.S. Bankruptcy Court in the District of Delaware, lead case number 20-12168. At filing, the Debtors, owner/operators of 186 fitness clubs (99 in New York, including under the "New York Sports Clubs" brand) noted estimated assets between $500.0mn and $1.0bn; and estimated liabilities between $500.0mn and $1.0bn.

The Debtors' memorandum in support of Plan confirmation (the "Memorandum") [Docket No. 773] notes, “Confirmation of the Plan is the culmination of hard-fought, good-faith negotiations among and between the Debtors and their key stakeholders — an effort that includes the consummation of a value-maximizing going-concern sale transaction that saved a substantial number of jobs, benefits customers and ensures vendors and other stakeholders will have an opportunity to transact with the Purchaser on a go-forward basis. The Plan structure — including the Prepetition Term Lender’s 20 percent equity stake in the go-forward business on account of the sale transaction and a $1 million contribution from the Purchaser to the General Unsecured Creditors — was negotiated between the Debtors, the Term Lender Group and the Purchaser (as applicable) as part of the Stalking Horse Bid negotiations. This cash contribution was intended to — and in fact did — help facilitate a smooth chapter 11 case that did not unnecessarily utilize estate resources. But, the agreed contribution was not on account of any particular estate asset or cause of action.

Later, as part of Plan negotiations, the Committee negotiated for the Non-Released Claims Trust, funded from the agreed $1 million Purchaser contribution to unsecured creditors. This resolution with the Committee was supported by the Debtors and other primary stakeholders, including the Term Loan Group and the Purchaser. The Committee supports the Plan. Without these hard-fought negotiations, there would likely be no recovery to unsecured creditors and the Debtors’ estate may be administratively insolvent. But, because of the global consensus reached as part of the Stalking Horse Bid, the Plan brings an orderly, efficient and value-maximizing conclusion to these Chapter 11 Cases."

The First Amended Disclosure Statement [Docket No. 549] adds, “Prior to the Petition Date, the… Debtors engaged with certain of their prepetition lenders on the potential terms of DIP financing and an overall restructuring transaction. In connection with these conversations, the Debtors had interest from two groups of Prepetition Lenders regarding potential financing proposals. After further negotiations with both parties, and upon review of each of their respective proposals, the Debtors ultimately decided to move forward with the proposal submitted by Tacit Capital (‘Tacit’), in collaboration with the applicable ad hoc group of Prepetition Lenders. Tacit’s proposal consisted of a DIP facility, coupled with a going-concern credit bid of substantially all of the Debtors’ assets. That bid formed the basis for the Debtors’ DIP financing and stalking horse bid.

The following is an updated summary of classes, claims, voting rights and expected recoveries (defined terms are as defined in the Plan and/or Disclosure Statement, also see Liquidation Analysis below):

On December 10, 2020, the Debtors' claims agent notified the Court of the Plan voting results [Docket No. 775], which were as follows.

Rejection of Plan by Class 4

The Memorandum provides background on the Debtors' failure to win Plan support from Class 4 notwithstanding that members of that class had earlier committed to a Settlement Agreement terms of which included support of the Plan.

The Memorandum provides: “With respect to Class 4 (Prepetition Loan Claims), the Debtors are hopeful that the members of the Term Loan Group will remedy their current breach of their obligations under the Settlement Agreement to support and vote for the Plan. The Term Loan Group actively engaged in the negotiations that led to the recovery to the Committee that is embodied in the Plan and Asset Purchase Agreement, which this Court has already ruled is binding on the Term Loan Group.

The Asset Purchase Agreement specifically provides that consideration from the Purchaser will be set aside for the benefit of unsecured creditors. The Term Loan Group’s failure to abide by the Settlement Agreement may frustrate the orderly wind down of these estates, including the distribution to unsecured creditors previously agreed to by the Term Loan Group. The Court should not allow the Term Loan Group’s refusal to abide by the Settlement Agreement to disrupt the Plan (and the recovery to General Unsecured Creditors contemplated thereby).

To the extent the Term Loan Group does not change its vote, the Debtors intend to seek confirmation of the Plan at all applicable Debtors, including seeking whatever equitable relief may be merited under the circumstances to avoid an inequitable and value destructive outcome to these Chapter 11 Cases. Nonetheless, even if the Court determines that Class 4 voted to reject the Plan, as more fully described below, the Debtors meet the requirements of section 1129(b) of the Bankruptcy Code to “cram down” these rejecting classes.”

TSI Parent's September 4th 10-Q provide [amounts in thousands]: “…recent events relating to the COVID-19 pandemic have had a material adverse effect on the Company’s results of operations, cash flows and liquidity and further contribute to conditions that raise substantial doubt about the Company’s ability to continue as a going concern within one year after the date the financial statements are issued. Under the terms of the 2013 Term Loan Facility, this is considered an event of default which allows the lenders to call the debt in advance of maturity. On March 13, 2020, the Company borrowed $12,500 from its 2013 Revolving Loan Facility and the Company continues to actively manage its cash flow on a daily basis.

If the Company cannot obtain refinancing, the remaining principal balance of the 2013 Term Loan Facility of $177,286 will become payable on November 15, 2020.

On March 16, 2020, the Company was mandated to close approximately 95% of its clubs pursuant to the exercise of emergency executive authority invoked by state and local governments in order to combat the spread of the COVID-19 pandemic. The Florida clubs continued to operate but were closed on March 20, 2020. There is significant uncertainty as to when the clubs will be allowed to re-open and as such, the Company has experienced reduced customer demand, a significant increase in membership terminations and may be unable to recover these members or generate new ones. The Company has taken some immediate steps to reduce operating costs and to conserve cash. The Company informed all non-executive employees working at clubs which have been ordered to close due to the COVID-19 pandemic (as discussed below) that their employment with the Company was terminated with immediate effect. The Company has also ceased paying rent at its club locations that are subject to mandatory closure due to COVID-19.

Due to the impact of the COVID-19 pandemic, the Company was further forced to close eight clubs permanently during the second fiscal quarter of 2020 and expects to permanently close additional clubs during the third fiscal quarter of 2020. Furthermore, re-opening protocols may include restrictions on capacity and activity that make it difficult for us to attract customers and generate revenue. For example, the Governor of New York announced on August 17, 2020 that fitness centers in New York will be permitted to re-open at only 33% capacity and that they must require customers to wear masks indoors at all times. In many cases, state and local governments have not provided a clear timeline for the projected further easing of restrictions, which creates uncertainty for our customers. These developments may further hinder the Company’s ability to generate operating revenue going forward.

In its most recent proxy statement, TSI Parent noted the following key shareholders:

The Debtors filed Plan Supplements at Docket Nos. 706 and 736 which attached the following documents:

Liquidation Analysis (see Exhibit B of Disclosure Statement [Docket No. 549] for notes) 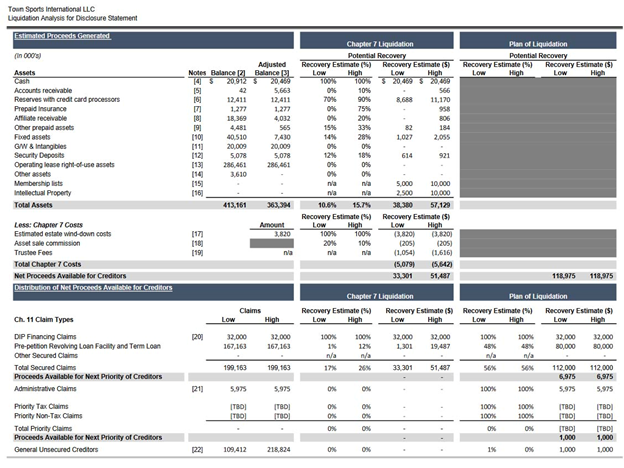 According to the Debtors: “Town Sports International Holdings, Inc. (the ‘Company” or “TSI.), is a diversified holding company with subsidiaries engaged in a number of business and investment activities. The Company’s largest operating subsidiary, TSI, LLC, has been involved in the fitness industry since 1973 and has grown to become one of the largest owners and operators of fitness clubs in the Northeast region of the United States. TSI’s corporate structure provides flexibility to make investments across a broad spectrum of industries in order to create long-term value for shareholders. Town Sports International is led by its Chief Executive Officer and Chairman of the Board, Patrick Walsh.”

As of December 31, 2019, the Debtors owned and operated 186 fitness clubs and collectively served approximately 605,000 members.