November 18, 2020 – The Debtors filed solicitation versions of their Revised Second Amended Plan of Reorganization and a related Disclosure Statement [Docket Nos. 1633 and 1634, respectively]; and separately filed redlines of each showing generally light changes to the versions filed on November 15, 2020 [Docket No. 1630].

Also on November 18th, the Court hearing the Tuesday Morning Corporation cases approved (i) the adequacy of the Debtors’ Disclosure Statement, (ii) Plan solicitation and voting procedures and (iii) a timetable culminating in a December 22, 2020 Plan confirmation hearing [Docket No. 1640].

In that objection, now withdrawn, the Creditors' Committee had argued that the $125.0mn should be placed in a trust upon Plan effectiveness and that unsecured creditors should receive contractually agreed interest (or as a fallback interest based on state judgment rates) for the period from Plan filing through to when general unsecureds are otherwise paid in full [Docket No. 1589]. As discussed below, the Equity Committee found the ask (and its presentation) a bit precious; but in the end the Creditors' Committee appears to have gotten the trust it wanted and has settled for the application of the 0.16% Federal Judgment Rate in place of either contractually agreed rates or state judgment rates. In any event, both parties have attached letters in support of the Plan to the Debtors' solicitation materials.

The Disclosure Statement [Docket No. 1634] notes, “Distributions under the Plan shall be made with: (1) Cash on hand, including Cash from operations; (2) the New ABL Credit Facility; (3) the New Real Estate Credit Facility; (4) the issuance of the General Unsecured Bonds; and (5) Reinstatement of the Tuesday Morning Corporation Interests, as applicable.”

The amended Disclosure Statement adds: “The following is a nonexclusive list of certain key terms in the Plan:

[As previously reported] November 16, 2020 – The Official Committee of Unsecured Creditors (the “Creditors’ Committee”) objected to the Debtors’ Disclosure Statement arguing that the projected 100% ($125.0mn) recovery for general unsecured creditors in Class 5 should be placed in trust upon Plan effectiveness and that unsecured creditors should receive contractually agreed interest through to the point when there claims are otherwise paid in full [Docket No. 1589].

The Debtors' Official Committee of Equity Security Holders (the "Equity Committee") has filed a response in support of the Disclosure Statement, arguing that the Creditors' Committee gives itself rather too much credit with its "revisionist history" and that it is equity holders who have otherwise stepped up to the plate to backstop a $40.0mn rights offering that will provide unsecured creditors with their 100% recovery. The Creditors' Committee, the Equity Committee suggests, might express a bit of gratitude as opposed to patting itself on the back; the "complaining" Creditors' Committee only weeks age championing a significantly inferior Plan based on a proposed sale that resulted in a "roughly 70% recovery to the unsecured creditors and no recovery to equity."

The Equity Committee responds [Docket No. 1598]: "After discussions with the Debtors and the Equity Committee, and after a thorough bid process involving multiple competing plan sponsors conducted around-the-clock over the past week, the Debtors and the Equity Committee selected a transaction with Osmium and Tensile that will provide for the following: (i) a 100% recovery to all Class 5 General Unsecured Claims to be paid in a lump sum payment in cash with interest; and (ii) recovery to equity interest holders as set forth in the Plan. In addition, the Plan features significant improvements to the go-forward corporate governance for the Debtors, such as four (4) new Board of Directors members and pre-set triggers to additional direct shareholder representation if certain performance fails to meet expectations.

Contrary to the Creditors’ Committee’s revisionist history in the UCC Objection, the Plan and Disclosure Statement are the result of the Equity Committee’s and Debtors’ extraordinarily successful efforts.

Despite the fact that its constituency is slated to be paid in full, in cash, with interest, the Creditors’ Committee still finds grounds to complain. First, the Creditors’ Committee demands that the General Unsecured Funds be immediately placed in trust for the benefit of General Unsecured Creditors, which trust will be responsible for reconciling and objecting to general unsecured claims. Aside from the fact that there is no statutory requirement that the General Unsecured Funds must be placed into trust, doing so here amounts to the 'fox guarding the henhouse,' as the Creditors’ Committee has no incentive to reconcile and object to general unsecured claims since such claims are being paid in full. Indeed, they have a disincentive to reconcile claims as they will look better to their constituency if they look the other way in reconciling claims.

Second, the Creditors’ Committee raises issues concerning the interest rate and amount to be paid to General Unsecured Creditors. The Equity Committee disagrees with the Creditors’ Committee that General Unsecured Creditors should be paid default interest at the contract rate through the payment date. This is a plan confirmation issue and need not be considered in connection with the Disclosure Statement." 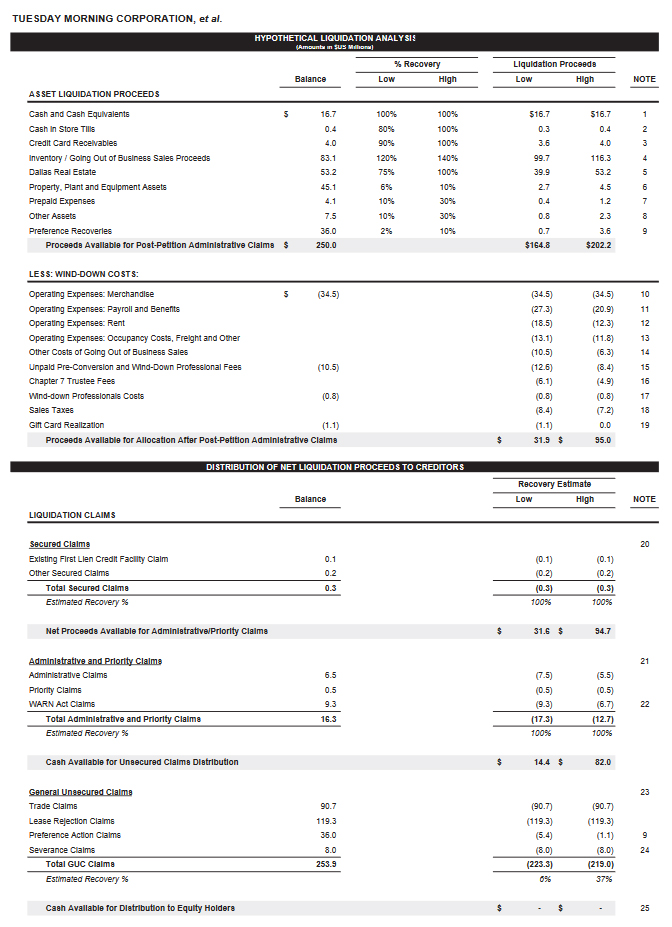 Tuesday Morning Corporation (NASDAQ: TUES) is one of the original off-price retailers specializing in name-brand, high-quality products for the home, including upscale home textiles, home furnishings, housewares, gourmet food, toys and seasonal décor, at prices generally below those found in boutique, specialty and department stores, catalogs and on-line retailers.  Based in Dallas, Texas, the Company opened its first store in 1974 and at filing operated 687 stores in 39 states.