As of writing, the Debtors have yet to file their Disclosure Statement. The Plan is attached to the Johnson Declaration (defined below) as is the Restructuring Support Agreement (the "RSA") and the Exit Facility Term Sheet. The Debtors are calling this a "prepackaged" plan notwithstanding that (i) voting is ongoing and (ii) the holders of $375.0mn of the Debtors' 2022 and 2025 notes are conspicuously absent from the restructuring support agreement and are set to share a $250k "General Unsecured Claims Distribution," and that only if they vote in favor of the Plan.

Through the Chapter 11 restructuring, the Company will eliminate approximately $2.0 billion in debt from its balance sheet, substantially deleverage its capital structure and strategically position the Company for long-term success.  Ultra aims to complete an efficient Chapter 11 bankruptcy with a goal of finalizing within the next three months."

Brad Johnson, the Debtors' CEO, commented: "After several months of liability management efforts and careful consideration of how best to navigate a challenging low commodity price environment and our debt levels, Ultra’s Board of Directors determined that a voluntarily filling for Chapter 11 reorganization provides the best outcome for the entity."

The Johnson Declaration provides: "After pursuing various alternatives over the course of several months…the Debtors commenced these chapter 11 cases to address its funded-debt obligations. Before the Petition Date, the Debtors engaged in extensive arm’s-length negotiations with their key stakeholders to develop a restructuring transaction to eliminate nearly $2 billion of the Debtors’ funded-debt obligations. The Debtors intend to implement this transaction pursuant to a chapter 11 plan (the ‘Plan’), filed contemporaneously herewith.

Specifically, the Plan contemplates equitizing the Term Loan and Second Lien Notes (both as defined below) in the form of new common stock. The Plan also provides for holders of the RBL Claims (as defined below) the option of equitizing their claims consistent with holders of the Term Loan or receiving an 85% cash recovery on account of the RBL Claims. All ongoing critical trade creditors will remain unimpaired under the Plan, which means that the Debtors will continue to pay such creditors in the ordinary course of business. This will allow the Debtor enterprise to minimized disruptions to their go-forward operations while effectuating this value-maximizing transaction in chapter 11."

On April 12, 2107, the Debtors emerged from a previous stay in Chapter 11 (also in the Southern District of Texas, lead case number 16-32202). In a press release Ultra heralded "$3.0 billion of new financings," approximately two-third's of which remains on the Debtors' balance sheet for this second turn through the Chapter 11 turnstile. What perhaps won't be a repeat in this iteration is a sudden uptick and commodity prices. As the Johnson Declaration describes the rare experience of a Chapter 11 debtor: "While Ultra was in chapter 11, crude oil and natural gas prices rebounded significantly, and Ultra unexpectedly became solvent."

On May 14, 2020, the Debtors, an ad hoc group of Term Loan Lenders (the “Term Lender Group”), the RBL Lenders, and certain holders of Second Lien Notes entered into a restructuring support agreement (the “RSA”). Further to the RSA, parties have agreed to support and vote in favor of the Plan, solicitation of which was launched on May 14th.

Although solicitation is ongoing, under the RSA, holders of approximately 85% of the Term Loan, 100% of holders of the RBL Claims, and holders of 67% of the Second Lien Notes have affirmatively committed to vote in favor of the Plan.

In addition to the financing arrangements noted below, the RSA contemplates an $85.0mn common stock and debt rights offering (the “Rights Offering”) to be offered to  eligible Term Loan Lenders.

The Debtors have secured a commitment for financing of up to $25.0mn from certain first lien term loan holders and certain of their first lien RBL credit facility lenders have executed commitment letters to provide exit financing in the form of a revolving credit facility with an initial borrowing base of $100.0mn and total commitments of $60.0mn.

In a declaration in support of the Chapter 11 filing (the “Johnson Declaration”), Brad Johnson, the Debtors' President and Chief Executive Officer, detailed the events leading to Ultra's Chapter 11 filing. The Johnson Declaration details an optimistic emergence from Chapter 11 in 2017 followed by a quick return to the reality of falling commodity prices; falls that went from menacing to terrible to operation-shutting and those drops even before (the Debtors suspended all drilling operations in September 2019) the Saudi/Russia spat and COVID-19 hammered cruel nails in the Debtors' already shut doors. Those latter events famously taking oil and gas prices below zero and making any aspirations of survival outside of Chapter 11 impossible for the Debtors who faced existential adjustments to the borrowing base under their revolving term facility, a going concern opinion from their auditors and a looming April 15th interest payment (30 day grace period) on their notes. All of these events more or less coalescing into a May 15th wrecking ball that threatened to smash through the Debtors' capital structure ("Cross-defaults will crystalize in all of their funded indebtedness and likely many material contracts").

The Johnson Declaration provides: "The Debtors emerged from their 2016 restructuring three years ago, as rising natural gas prices buoyed their exploration and production businesses. Although the Debtors were able to provide significant value to their stakeholders at that time, the subsequent, severe decline in natural gas prices seriously impacted the Debtors’ capital structure and liquidity.

Through 2019, the price for natural gas continued to decline from already depressed levels. In response, the Debtors reduced their level of investments and, by September 2019, suspended all of its drilling activities. Commodity prices have experienced recent volatility, which has been exacerbated by the sudden, combined impact of the COVID-19 pandemic and the oil price dispute between Saudi Arabia and Russia in the first quarter of 2020.

With surging supply and depressed demand, the global energy market has suffered unprecedented losses. At one point in April 2020, oil prices for the prompt month declined to well below $0 per barrel—the first time in history.

The Debtors have an annual cash interest burden of over $133 million and quarterly amortization payments of $2.44 million on the outstanding principal of the Term Loan.

Furthermore, the Debtors’ independent auditors have included a going concern qualification to their audit opinion for the Debtors’ December 31, 2019 financial statements as disclosed in Ultra Petroleum’s Form 10-K filed on April 15, 2020, which is an event of default under the Revolving Credit Facility and the Term Loan.

Finally, under the Unsecured Notes Indenture, the Debtors were obligated to pay interest under the 2022 Notes and 2025 Notes on April 15, which totaled approximately $13.2 million in aggregate. Given all of the foregoing considerations, the Debtors determined in their business judgment that making those interest payments was not in the best interests of their stakeholders. As a result of that non payment and the issuance of a going concern qualification opinion by Ernst & Young LLP related to Ultra’s 2019 Form 10-K, the Debtors entered into the 30-day grace period. Cross-defaults will crystalize in all of their funded indebtedness and likely many material contracts following the expiration of the grace period if the interest payments have not been made at that time or if the default from going concern qualifications for the Debtors’ financial statements is not cured.

The Debtors were listed on The NASDAQ Global Select Market. On August 8, 2019, Ultra Petroleum’s common shares were delisted, as a result  of non-compliance with the minimum bid price requirement for continued inclusion on NASDAQ. The common shares are now trading in the over-the-counter markets on the OTCQX tier of the OTC Bulletin Board under the ticker “UPLC.”As of the Petition Date, Ultra Petroleum has approximately 199,335,784 outstanding shares of common stock.

According to the Debtors: "Ultra is one of the largest oil and natural gas exploration and production ('E&P') companies in Wyoming. Its business is focused primarily on developing long-life natural gas reserves in the Pinedale and Jonah fields located in the Green River Basin. Ultra is party to multiple agreements with midstream service providers that gather, compress, and process natural gas from its fields, which allows Ultra to sell its natural gas production 'as produced.' The customer base for Ultra’s oil and natural gas isdiverse and situated in various regions across the United States. Over the last year, natural gas commodity prices have eroded and have been further exacerbated as a result of certain macroeconomic conditions effecting the oil and gas market. Nevertheless, Ultra continues to be focused on generating operating cash flows, reducing its indebtedness, and preserving future potential drilling inventory for more constructive natural gas prices in order to continue its go-forward operations." 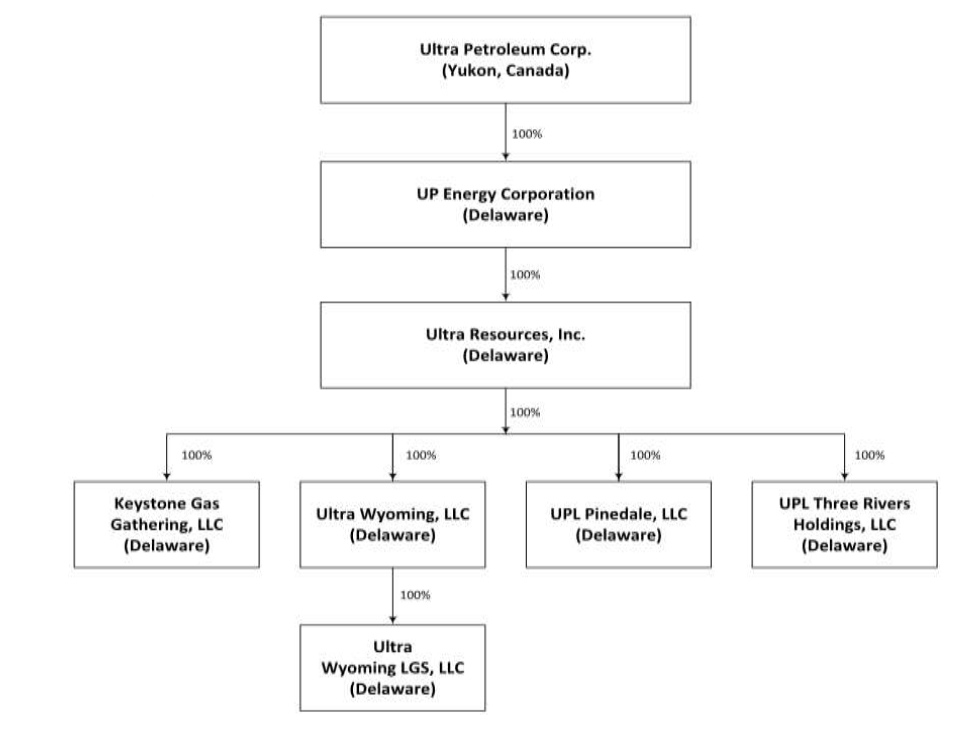