The Chonister Declaration (defined below) provides: "In July 2020, the Debtors in consultation with their first lien lenders made the decision to restart the sale process with the aim of consummating a 363 sale through an in-court process, but if an acceptable buyer could not be found, the plan of distribution would toggle to a debt-to-equity reorganization plan after assessing third-party bids."

In a declaration in support of the Chapter 11 filing (the “Chronister Declaration”), Jamie Chronister, the Debtors’ Chief Restructuring Officer, chronicles the events leading to Ursa’s Chapter 11 filing. For these Debtors. like many others, the slide into bankruptcy was predicated by depressed commodity prices and an over-supply of natural gas (in 2012, the Debtors "bought heavily gas weighted assets"). Adding to a mix of challenges that ultimately resulted in a borrowing base reduction were: drilling failures, the 2019 changes in Colorado's regulatory regime, "albatross" contractual arrangement and, of course, COVID-19. The Debtors clearly signal that it is the "burdensome long-term contracts entered into during a dramatically different market environment [and that] created an albatross that was too much to endure," that will be central to this bankruptcy process and any going concern sale aspirations they harbor. In particular several transportation contracts (certain of which were never even used) that the Debtors unsuccessfully attempted to modify prepetition and which are now the subject of litigation. As discussed further below under "Marketing Efforts," those contracts were the blocker as to an out-of-court restructuring or asset sale: "Through the marketing process, the Debtors and their advisors determined that an out-of-court sale likely was not achievable due to the fact that bidders disfavored the financial burdens on the Company created by the WIC TSA and the Ruby TSA, and potential buyers wanted to purchase the assets free and clear of such contracts and related liabilities."

The Chronister Declaration provides: “Like similar companies in this industry, the Company’s natural gas and oil operations, including their exploration, drilling, and production operations, are usually capital-intensive activities that require ongoing access to cash. In December 2012, the Company bought heavily gas weighted assets. Henry Hub natural gas prices moved unpredictably from over $5.00 per mmbtu in 2014 to nearly $2.00 per mmbtu for the past twelve months, and to about $2.50 per mmbtu today. Alongside the fluctuation in commodity prices, the Company also encountered both successes and failures in their drilling program. Following drilling results that were less than internal and third-party audited expectations coupled with depressed prices, the first lien lenders reduced the Company’s borrowing base, thereby reducing liquidity and the Company’s ability to drill more wells. Things were only made more complicated by the change in Colorado’s regulatory environment in 2019 that restricted oil and gas operations.

In addition to long-term pricing declines due to the development of large gas basins such as the Marcellus and Utica (as well as from the massive production of ‘associated gas’ from oil development in basins such as the Permian), gas prices have been challenged by an abundance of supply. Moreover, the initial spread of COVID-19 caused decreased factory output, electricity usage, and transportation, resulting in a decline in commodity demand and further strains on commodity pricing.”

it gets worse. The Chronister Declaration continues: "Eventually, liquidity shortfalls and declining cash flows caused defaults of the Debtors’ leverage covenants. The Company’s Prepetition RBL Credit Facility matured in December 2019 and a going concern opinion was issued on April 3, 2019. Furthermore, burdensome long-term contracts entered into during a dramatically different market environment created an albatross that was too much to endure and decreased the prospect of avoiding these bankruptcy filings. Most significantly, the Debtors had expensive obligations under certain agreements for pipeline transportation that the Debtors did not even use. The Debtors’ prolonged attempts to negotiate a termination or substantial modifications to the long-term interstate transportation agreements bore no fruit and litigation was filed around two transportation agreements…"

The Debtors have arranged commitments for debtor-in-possession (“DIP”) financing that is comprised of (i) $10.0mn of revolving loans and (ii) a $10.0mn roll-up of prepetition loans. The Debtors anticipate that the proposed DIP financing will provide the necessary liquidity to meet their financial obligations, continue operations during these chapter 11 cases, and execute a sale process.

The following is an overview of the Debtors' indebtedness as of the Petition date:

The Prepetition RBL Credit Facility matured on December 31, 2019, and at that time, the borrowing base was set at $220.0mnn. As of the Petition date, the Debtors owed an aggregate principal amount of approximately $209.0mn, plus due and unpaid interest in the amount of $15.9mn, plus any additional fees, interest, and expenses.

The Prepetition Second Lien Credit Facility’s term loan matured on July 21, 2020. As of the Petition Date, the applicable Debtors owed an aggregate principal amount of approximately $50.0mn, plus due and unpaid interest in the amount of $7.8mn, plus any additional fees, interest, and expenses.

The Chronister Declaration provides: "In December 2018, the Debtors retained…Lazard Frères & Co LLC (‘Lazard’) to explore potential…sale and restructuring alternatives. Lazard conducted a widespread marketing process with the aim of selling substantially all of the Debtors’ assets, whether in court or out of court (bidders were advised that each could disclose its preferred transaction and closing protocol). As part of the sale process, Lazard contacted over 35 parties, which resulted in the Debtors executing confidentiality agreements with over 15 interested parties. After conducting preliminary diligence, the Debtors received several initial indications of interest in March 2019, which the Debtors reviewed with their advisors before proceeding with a second round process to allow bidders to conduct further diligence and to refine proposals. In May 2019, the Debtors received multiple second-round proposals. While the Debtors continued to engage with an assortment of potential buyers to further improve and refine proposals, the Company and its advisors also allowed additional parties who inquired about the assets to participate in the process, regardless of established deadlines. Through the marketing process, the Debtors and their advisors determined that an out-of-court sale likely was not achievable due to the fact that bidders disfavored the financial burdens on the Company created by the WIC TSA and the Ruby TSA, and potential buyers wanted to purchase the assets free and clear of such contracts and related liabilities. Notably, these interstate transportation service agreements do not purport to create covenants running with the land and are entirely distinguishable from the gathering agreements that have been the subject of recent litigation in various bankruptcy courts throughout the country.

The Debtors ultimately narrowed the list to one bidder that was willing to serve as a stalking horse bidder in an in-court sale process that would provide a brief overbid opportunity. Unfortunately, an agreement ultimately was not reached with that party. The Debtors and the first lien lenders began to discuss pursuing a final in-court sale process, while reserving the ability to toggle to an equitization plan in the event the sale process was not successful. Shortly thereafter, the COVID-19 pandemic and its associated impact on commodity prices and the broader economy led the Debtors, in consultation with their first lien lenders, to pause marketing efforts and defer the sale and filing of these chapter 11 cases as long as possible so as to maximize the estate value. In the interim period the Debtors continued to entertain inquiries and also explored options to sell less than all of the Debtors’ assets.  In July 2020, the Debtors in consultation with their first lien lenders made the decision to restart the sale process with the aim of consummating a 363 sale through an in-court process, but if an acceptable buyer could not be found, the plan of distribution would toggle to a debt-to-equity reorganization plan after assessing third-party bids."

According to the Debtors: "Ursa is an exploration and production company backed by a private equity commitment from Denham Capital. Ursa is focused on developing oil rich unconventional plays as well as the acquisition of conventional oil and gas producing properties. Ursa is actively leasing in several prospective hydrocarbon provinces.

The Principals at Ursa Resources Group II LLC have operated properties in a number of onshore basins across the United States. We are intimately familiar with operations along the Gulf Coast Texas, the Permian Basin of Texas and New Mexico, the Arkoma Basin of Arkansas, as well as the Williston Basin of North Dakota and Montana.

Ursa management has a wealth of experience with the development of unconventional reservoirs. Most recently the Principals managed Ursa Resources Group LLC, a successful 'Bakken Shale Play' production company. We have spent many years determining what makes for successful resource development in shale gas reservoirs and have completed extensive field studies of the 'Eagle Ford Shale Play,' the 'Bakken Shale Play,' the 'Barnett Shale Play', and the 'Marcellus Shale Play.' Additionally, we have completed studies of several tight conventional reservoirs that hold potential for development utilizing technology pioneered in the shale plays. 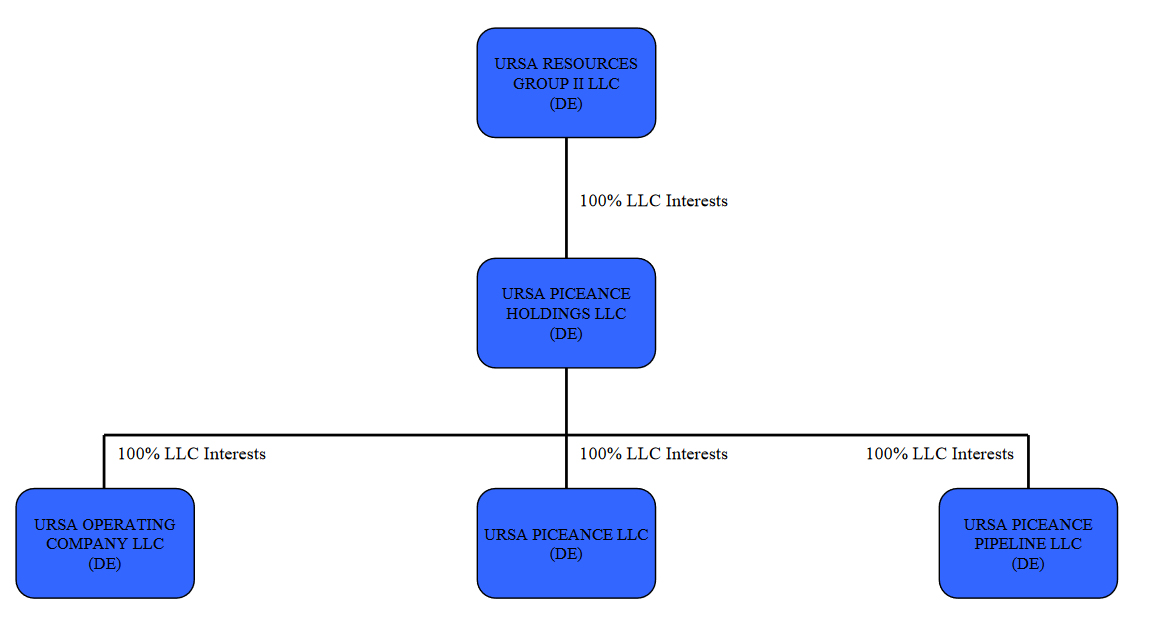