November 17, 2020 – The Court hearing the Valaris cases issued an order approving a proposed key employee retention plan (the “KERP”) covering approximately 490 key non-insider employees and having a maximum payout of $24.2mn [Docket No. 684]. The KERP terms have been modified, notably in respect of the addition of an EBITDA target metric, and are attached to the order as Exhibit 1 (as well as summarized below).

On October 20th, the Debtors filed a motion requesting Court approval of (i) the KERP and (ii) a key employee incentive plan (the “KEIP,” and together with the KERP, the “Compensation Plans”) which was to cover twelve members of the Debtors’ senior management team [Docket No. 537]. Although the KERP progressed through to the current approval order, the KEIP has elicited concerns from the Debtors' Official Committee of Unsecured Creditors (apparently now resolved, albeit with significant amendments including as to a new EBITDA metric) and Citibank NA as administrative agent for the Debtors' senior credit facility (not resolved, and in need of more time to evaluate those amendments).

These concerns ultimately led to a splitting of consideration of the two plans; with a scheduled November 17th hearing to go ahead but only in respect of the KERP while the KEIP would be considered at a later November 30th hearing (see more on Citibank's concerns below).

Background on the Compensation Plans

The Debtors' requesting motion notes, “Historically, the Debtors’ success has been borne on the shoulders of their most important asset: their highly skilled, productive workforce. With a fleet of 63 rigs, the Debtors operate the industry’s largest modern offshore drilling fleet and maintain drilling operations in nearly every major offshore market. The Debtors’ fleet is among the most technologically advanced in the industry, requiring well-trained crews possessing specialized and project-specific knowledge to meet the requirements of customers like Saudi Aramco, BP plc, Chrysaor Holdings Limited, Abu Dhabi National Oil Company, Lundin Energy, Royal Dutch Shell plc and Eni S.p.A. Indeed, the Debtors have been recognized in industry surveys for their operational excellence and customer satisfaction. To maintain such high standards and drive their financial performance, the Debtors incentivized their employees through various compensation programs providing market-based financial incentives based on performance. Incentivizing and retaining this specialized workforce while the Debtors remain in chapter 11 is even more essential, as replacing these employees cannot occur without substantial costs and disrupting customer operations….

Like other similar-sized companies in the oil and gas industry, the Debtors historically utilized a number of incentive- and retention-based programs to ensure that all employees have a stake in, and the opportunity to benefit from, the company’s performance. In addition to cash-based programs, the Debtors’ prepetition compensation programs also included stock awards for senior management and most employees participating in the proposed KERP. However, following the decline of the Debtors’ stock price as result of the COVID-19 crisis, an oil price war and long-term macroeconomic factors, the Debtors concluded that these prepetition stock awards no longer served their purpose of properly incentivizing the Debtors’ workforce."

The motion further states, "The Debtors designed the Compensation Plans to achieve the desired operational performance while ensuring they were consistent with their own prepetition and industry practices, within the market range of compensation offered at comparable companies and reasonable in terms of size and scope. Specifically, the participants in the Compensation Plans are the same employees who were eligible to participate in the Debtors’ prepetition plans. The incentive plan metrics – downtime, expense reductions and safety – are common across the Debtors’ competitors…The total direct compensation under the Debtors’ plans at ‘target’ is 6 percent lower under the Compensation Plans – $99.3 million, comprised of the $19.1 million under the KEIP and the $80.2 million under the KERP – than it was under the Debtors’ 2019 prepetition plans ($105.0 million). The ‘target’ cost per participant is at the 31st percentile for the KEIP and the 70th percentile for the KERP – both firmly within market. Thus, the Compensation Plans will encourage and reward achievement of performance targets established by the Board, focus key employees on value-maximization for the benefit of all stakeholders and offer total compensation opportunities consistent with prior years and the market based on court-approved plans for similarly situated companies.”

The Debtors employ approximately 3,500 personnel worldwide, excluding contract employees. The KERP participants are 490 key non-insider employees (each a “KERP Participant,” and collectively the “KERP Participants”) whose knowledge and experience are essential to preserving operational stability and maximizing estate value. These employees include highly trained and knowledgeable personnel that would be extremely difficult to replace without a negative effect on the Debtors’ business. Indeed, since the beginning of 2020, several key employees at the senior manager level and above have resigned from the Debtors (including two vice presidents, two directors and an associate general counsel, among others). Given the increasing demands placed upon the potential KERP Participants during the chapter 11 cases, providing compensation designed to motivate key employees to remain with the Debtors throughout the restructuring process is essential. For these and other reasons, the Restructuring Support Parties support the KERP.

KERP Modifications [See Exhibit 1 of Order at Docket No. 684] 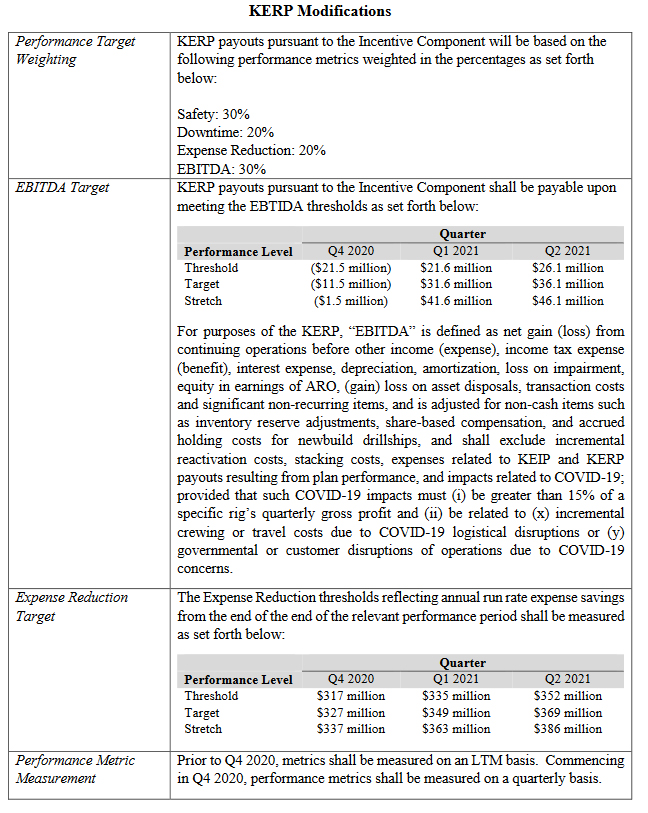 On November 11, 2020, in response to a follow-up on the courtesy adjournment request, counsel to the Debtor indicated that: (i) the Debtors had reached an agreement with the Creditors’ Committee with respect to its potential objections to the KERP/KEIP Motion and (ii) the Debtors would consider bifurcating the hearing on the KERP (as to which the RCF Agent had no objection) to go forward on the Current Hearing Date and the hearing on the Proposed Insider Plan at a later date as agreed by the parties and approved by the Court.

Although the Debtors were aware that the RCF Agent had been considering an objection to the KERP/KEIP Motion since it first sought informal discovery in late October, the Debtors did not inform the RCF Agent that they were planning to modify the Proposed Insider Plan prior to November 11 – a day after the RCF Agent filed its Objection and despite the parties being engaged in discovery (including scheduling depositions). Late that same evening (i.e. on November 11, which was a federal holiday), the Debtors filed a revised proposed Order (I) Authorizing and Approving the Debtors’ (A) Key Employee Incentive Plan and (B) Key Employee Retention Plan and (II) Granting Related Relief [ECF No. 667] (the 'Revised KERP/KEIP Order'), roughly 36 hours before the RCF Agent is scheduled to take the oral deposition of the representative of the Debtors…Among other things, the New Proposed Insider Plan included EBITDA as a major new metric (with significant modifications to the standard EBITDA definition), a re-weighting of the other major metrics and material modifications to other significant provisions of the Proposed Insider Plan.

Given the material changes made, which the RCF Agent needs time to evaluate, fundamental due process requires an adjournment of the Current Hearing Date. The RCF Agent made such a request, which the Debtors’ denied, and instead have insisted that the RCF Agent proceed with depositions without having any meaningful opportunity to analyze the New Proposed Insider Plan or determine the extent to which it would supplement its Objections or discovery requests in order prepare for a hearing…The extent of the changes in the New Proposed Plan requires that it be treated as an entirely new motion, in order to allow the RCF Agent to determine the extent to which it objects to the New Proposed Insider Plan (if at all), and if appropriate, to obtain additional discovery."

Carestream Health, Inc. – Medical Imaging Specialist Files Prepackaged Chapter 11 with Over $1bn in Indebtedness; RSA Has Debtors Shedding $470mn of that Debt and Emerging in 45 Days