January 28, 2021 – The Debtors’ filed their modified Third Amended Plan of Reorganization with an attached redline showing changes to the version filed on December 30, 2020 [Docket No. 988]. The Debtors had filed what appears to be an identical Plan (except for changes as to the filing date, shifting from January 27th to January 28th) the previous day. The Debtors have also filed a Plan Supplement [Docket No. 986] attaching key exit governance documents (see below).

There are several changes to the treatment of discrete classes which are otherwise covered in the summary table below. These include (i) an additional $1.0mn of cash for Class 6 (“Jersey Bond Claims”) and (ii) in respect of members of Class 10 (“Newbuild Claims”) who vote in favor of the Plan, an augmented recovery to include: "(x) the Newbuild Equity Pool [0.5% of the New Valaris Equity], (y) $5 million in Cash payable on or prior to the Effective Date, and (z) such other  consideration as set forth in the Newbuild Contracts…"

On August 19, 2020,  Valaris plc and 89 affiliated Debtors (NYSE: VAL), “the industry leader in offshore drilling services across all water depths and geographies," filed for Chapter 11 protection noting estimated assets of $13,038,900,000 and estimated liabilities $7,853,500,000 citing "the substantial downturn in the energy sector [as] exacerbated by the COVID-19 pandemic" as necessitating the filing.

For our coverage of the ongoing dispute with the Debtors' prepetition senior lenders fronted by Citibank N.A. (the "RCF Agent"), see our story on Docket Nos. 815 and 816 and the brief summary below.

The Debtors' Disclosure Statement [Docket No. 987] provides, “Since the Petition Date, in addition to obtaining approval of the DIP Facility, the Debtors have continued to build consensus with the Holders of the Senior Notes for the deal reflected in the RSA. Following the Petition Date, additional holders of senior notes signed joinders to the RSA, resulting in holders of approximately $1.5 billion of additional bond debt signing the RSA. In total, 72 percent in aggregate principal amount of Senior Notes signed the RSA.

The RSA…contemplates a series of transformative restructuring transactions that will:

The Debtors also developed the RSA into the Plan, which provides as follows:

The formulation of the RSA and Plan is a significant achievement for the Debtors in the face of historic commodity price declines and a depressed operating environment. The Debtors strongly believe that the Plan is in the best interests of the Debtors’ estates and represents the best available alternative at this time. Given the Debtors’ core strengths, including their modern fleet, highly skilled workforce, global reach and successful operating and safety track record, the Debtors are confident they can efficiently implement the restructuring set forth in the RSA and Plan to ensure their long-term viability and success. For these reasons, the Debtors strongly recommend that Holders of Claims and Interests entitled to vote to accept or reject the Plan vote to accept the Plan.”

The Disclosure Statement [Docket No. 879] attached the following exhibits:

On January 27, 2021, the Debtors filed a Plan Supplement and attached the following documents [Docket No. 986]:

On December 15, 2020, the Debtors’ filed their second amended Chapter 11 Plan of Reorganization and a related Disclosure Statement, showing changes to the versions filed on December 11, 2020 [Docket Nos. 815 and 816, respectively].

Substantially all of the amendments in the revised Plan documents relate to ongoing disputes between the Debtors (advocating positions the Debtors share with the "Ad Hoc Group," defined below) and the Debtors' prepetition senior lenders fronted by Citibank N.A. (the "RCF Agent") in what is shaping up as an epic battle between lender groups pitting seniority against size.

The RCF Agent represents holders of senior bank debt issued under the Debtors' prepetition revolving credit facility (the “Revolving Credit Facility” and the "RCF Lenders," respectively). That is $581.0mn of top-of-the-waterfall senior debt (which the revised Disclosure Statement now concedes is more properly $623.2mn, with the inclusion of $41.2mn of letters of credit issued under that facility). That heft, however, pales in comparison to the Debtors' $6.5bn of bond debt, the majority of which lines up behind the Ad Hoc Group (72% in amount signing up to the RSA).

From the outset, the RCF Agent (and holders of "Credit Facility Claims" stemming from RCF debt) has objected to the fundamental structure of the Debtors' Plan which equitizes ALL of the Debtors' prepetition funded debt; that of senior lenders and noteholders alike. Senior lenders have howled foul at being equitized and for the failure of the Plan to respect their structural seniority; insisting that at least some of their recovery be in the form of takeback debt. That approach was not, however, adopted by the Debtors or by the ad hoc group of holders of the Debtors' Senior Notes (the “Ad Hoc Group”) with whom the Debtors ultimately executed a restructuring support agreement (the "RSA").

Even worse for the RCF Lenders than being treated as a common bondholder, however, is (i) being excluded from the handsome fees that the Ad Hoc Group Group has awarded itself for its roles in providing DIP financing, exit financing and backstopping a rights offering (notwithtstanding, the RCF Agent argues, superior alternatives available from the RCF Lenders as to each) and (ii) having to accept a Plan which over-values the Debtors and leaves RCF Lender with an equity holding (32.5%) that based on a more rationale valuation (and reality) will not make it whole [as discussed further below, the RCF Agent believes that current trading prices for bond and bank debt imply a valuation of approximately $1.0bn, which would require that the RCF lenders be left with 54.7% of the emerged Debtors' equity].

The Debtors' "unwavering pursuit of their fatally flawed prepetition deal with the ad hoc group behalf of the Ad Hoc Group," the RCF Agent sums up, "is untethered to the constraints of the Bankruptcy Code."

"Such a step-down of the priority of the Credit Facility Claims into Post-Emergence Parent Equity, which is a security that would be shared with structurally junior holders of Senior Notes (the 'Noteholders')," the RCF Agent argues "directly contravenes long-standing Supreme Court precedent."

In reflecting on why the Debtors and the Debtors' management have pursued the Plan "in a continued abdication of their fiduciary duties to all creditors," the RCF Agent muses that "it is difficult to discern with precision the Debtors’ motivation…", before surmising that the Plan's management incentive plan (the "MIP," which is set to to leave up to 10% of the Debtors' emerged equity on the table for management) might have something to do with it, the proposed MIP adding insult to injury by further diluting the RCF Lenders' already speculative equity recovery and (as discussed below) contravening terms in the RSA.

In a press release announcing the filing, the Valaris advised that it had: “entered into a binding Restructuring Support Agreement (the 'RSA') and Backstop Commitment Agreement (the 'BCA') with approximately 50% of its noteholders ('Consenting Noteholders'). Valaris will undergo a financial restructuring that is intended to reduce its debt load substantially, support continued operations during the current lower demand environment and provide a robust financial platform to take advantage of market recovery over the long term.

The RSA and the BCA contemplate, among other items, the full equitization of the Company's pre-petition revolving credit facility and unsecured notes, a fully backstopped rights offering to noteholders for $500 million of new secured notes, the effective cancellation of existing equity interests in the Company in exchange for, in certain circumstances, warrants for post-emergence equity and payment of trade claims in full in cash.”

Tom Burke, the Debtors' President and Chief Executive Officer, commented: “The substantial downturn in the energy sector, exacerbated by the COVID-19 pandemic, requires that we take this step to create a stronger company able to adapt to the prolonged contraction in the industry, and to continue to enhance our position as overall market conditions improve. We have taken several steps to right-size and streamline our organization in line with our goal to be the offshore drilling cost leader. Now, we intend to use this restructuring to complement these measures to create a stronger financial structure for the Company. Valaris will continue to serve our customers uninterrupted through this process, delivering safe and reliable operations, through its highly-capable rig fleet."

The Debtors filed an 8-K which included cleansing materials in addition to attaching the RSA and BCA. 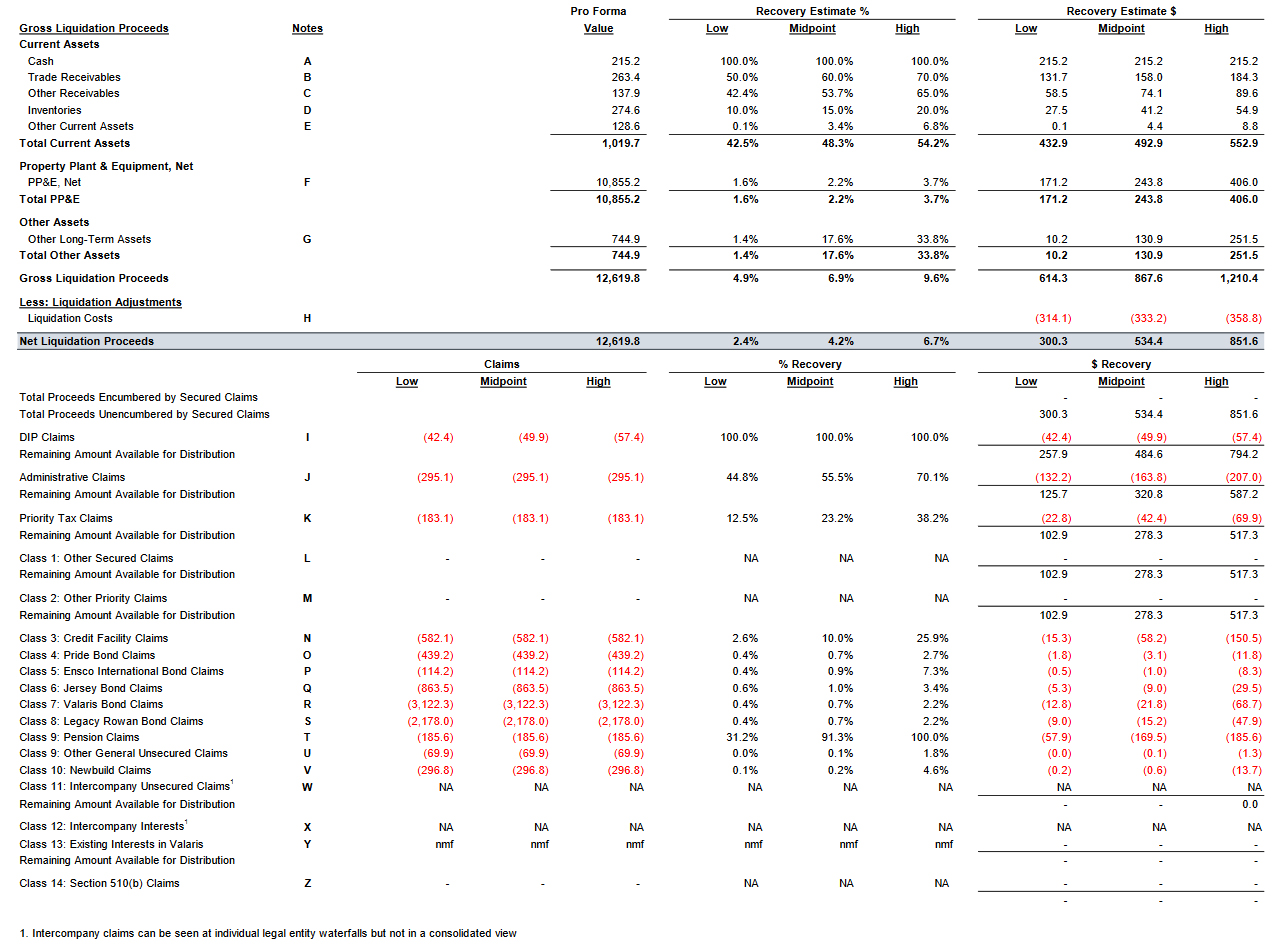 According to the Debtors: “Valaris plc (NYSE: VAL) is the industry leader in offshore drilling services across all water depths and geographies. Operating a high-quality rig fleet of ultra-deepwater drillships, versatile semisubmersibles and modern shallow-water jackups, Valaris has experience operating in nearly every major offshore basin. With an unwavering commitment to safety and operational excellence, and a focus on technology and innovation, Valaris was rated first in total customer satisfaction in the latest independent survey by EnergyPoint Research – the ninth consecutive year that the Company has earned this distinction. Valaris plc is an English limited company (England No. 7023598) with its corporate headquarters located at 110 Cannon Street, London EC4N 6EU.”