* Jack H. Owoc is the sole shareholder and sole director of the lead Debtor.

In a press release announcing the filing, the Debtors advised that: “VPX’s Chapter 11 efforts are being supported by $100 million of additional financing from VPX’s esteemed syndicate lenders to help ensure operations continue uninterrupted during the restructuring process….This filing is a restorative action to help the company recover from recent challenges, including multiple lawsuits that impacted the Company’s short-term outlook and the cost impact of reconstituting the company’s national distribution network that resulted in a summer revenue gap. VPX intends to use the Chapter 11 process to recapitalize and emerge from bankruptcy well-positioned to continue its rapid growth in the beverage market.

Jack Owoc, CEO and founder of VPX, commented: “We are excited about our future, and particularly the new distribution system that we have spent the better part of this year assembling. Utilizing our new state-of-the-art decentralized direct store distribution (DSD) will allow Bang Energy to get back to our pre-Pepsi meteoric annual success of several hundred percent year over year growth. We are coming like a freight train and cannot be stopped.”

At the end of September, Monster Energy Co. ("Monster") was awarded $293.0mn ($272.0mn for a false advertising claim, $18.0mn for tortious interference, and $3.0mn for a trade secret claim) by a California federal jury that agreed with Monster that VPX's "super" creatine was in fract a standard water-soluble creatine and not based on a proprietary “new” compound as claimed.

In a declaration in support of first day filings (the “DiDonato Declaration”) [Docket No. 26], John C. DiDonato, the Debtors' Chief Transformation Officer, makes it clear that "VPX’s esteemed syndicate lenders" Truist are not remotely happy with their almost $400.0mn (principal, interest and fees) predicament and have no motivation to continue their relationship with the Debtors beyond "repayment in full of the obligations owed to them." The Debtors have been in default in respect of the Truist Prepetition Credit Agreement since March of 2022, with Truist agreeing to enter into forbearance agreements from that date and eventually to supply the Debtors with an additional $60.0mn of critical funding. Without that funding, and now Truist's proferred DIP financing, the Debtors (with what their investment bank Rothschild & Co US Inc. characterizes as zero possibility of sourcing alternative financing arrangements) had no ability to continue operations, with or without 1,000 social media influencers.

DiDonato provides: “The Company commenced these cases in order to (a) obtain "breathing room" from pending litigation, including the OBI Judgment and FAA Verdict, as well as consequences of pending defaults under the Prepetition Credit Agreement; (b) obtain an essential infusion of liquidity totaling $100 million to help stabilize the Company's operations at a critical juncture in the Company's business cycle (i.e., on the precipice of launching its new distribution network) through the DIP Facility (as defined and described below); and (c) pursue a recapitalization, a replacement financing, or other transaction that will result in the payment in full of the Company's outstanding obligations under the Prepetition Credit Agreement and position the Company for success upon its emergence from chapter 11.

Since March 2022, the Company has been in default under the Prepetition Credit Agreement because of, among other things, failure to satisfy certain financial maintenance covenants. From March 2022 through September 30, 2022, the Prepetition Secured Parties agreed to forbear from exercising their rights and remedies in respect of those defaults pursuant to five forbearance agreements entered into with the Company. Since June 2022, the Secured Lenders have also advanced critical funding (totaling approximately $60 million) to the Company to enable it to continue operations, transition away from its distribution arrangement with Pepsi and to its new best-in-class distribution network, pursue a capital raise process, and engage in contingency planning around a potential filing. At all times since June 2022, the Secured Lenders have made clear that such accommodations were to assist the Company in achieving their desired outcome: repayment in full of the obligations owed to them.

Although the Company remained in discussions regarding potential financing transactions with numerous parties as of the Petition Date, in connection with the most recent forbearance, the Secured Lenders indicated that they would not continue to forbear past September 30, or advance additional funding outside of chapter 11. The Secured Lenders did, however, offer to provide sufficient funding for a chapter 11 process through the proposed facility under the DIP Credit Agreement, and afford the Company an opportunity to continue their efforts to recapitalize their balance sheet and refinance or otherwise repay the obligations under the Prepetition Credit Facility. To avail themselves of this opportunity and mitigate the jeopardy to VPX's assets following entry of the OBI Judgment and FAA Verdict, the Company commenced these Chapter 11 Cases.

The DiDonato Declaration provides: "In April 2020, to both centralize and expand its distribution footprint and achieve further growth, VPX changed paths and entered into an exclusive distribution agreement (the 'Pepsi Distribution Agreement') with PepsiCo, Inc. ('Pepsi'), which encompassed the distribution of 'BANG-branded Licensed Products'….On October 23, 2020, the Company terminated the Pepsi Distribution Agreement due to its view that Pepsi's strategies were suboptimal and the parties' varying expectations and visions. Following the termination, vanous legal proceedings ensued. While the legal proceedings were pending, VPX and Pepsi engaged in constructive dialogue toward a comprehensive settlement. On June 21, 2022, VPX and Pepsi entered into that certain confidential settlement agreement and release of all claims (the 'Pepsi Settlement'), under which VPX and Pepsi agreed to, among other things, the dismissal of the Existing Legal Matters…he termination of the Pepsi Distribution Agreement, and entered into certain post-termination transition arrangements. In accordance with resolution of the Existing Legal Matters, Pepsi continued to distribute products for VPX into 2022. In 2021, Pepsi's distribution accounted for approximately 81.6% of VPX's sales."

According to the Debtors: “Since 1993, Florida-based Vital Pharmaceuticals, Inc., d/b/a Bang Energy and as VPX Sports, has developed delicious performance beverages, supplements, and workout products to fuel high-energy lifestyles. In addition to one of the top three energy drink brands in the U.S., Bang Energy, the company’s premium quality products include keto-friendly Meltdown®, Quash®, Vooz™ and Redline®. All of the company’s products are personally designed and approved for taste and effectiveness by founder and CEO, Jack Owoc, who started the family-owned company with one goal in mind: to produce the highest-quality sports supplements and performance beverages in the world backed by university scientific research. Since its founding 29 years ago, Jack Owoc has commissioned 30 gold standard university research studies using human test subjects to prove the efficacy and quality of the company’s products by sports nutrition PhD researchers at prestigious institutions of higher learning including but not limited to: UCLA, University of South Alabama, Florida State, Baylor University, University of Southern Maine, University of Memphis, Florida International University and College of New Jersey, among others. The company’s products and supplements are available in grocery and convenience stores around the world. Jack Owoc and his team continuously innovate new products that deliver on taste, optimal performance benefits and nutrition needs.”

The DiDonato Declaration adds: "Established in 1993 and headquartered in Weston, Florida, the Company is a frontrunner in sports nutrition and a pioneer in the performance energy drink industry.  The Company produces novel and great tasting beverages without sugar, calories, carbohydrates, or artificial flavors, and with caffeine, electrolytes, and other performance ingredients. The Company's leading product is Bang energy drink ('Bang'), which was launched by the Company in 2012 and was the fastest growing beverage in the U.S. non-alcoholic beverage sector in 2018. Bang is the third best-selling energy drink in the United States as measured by retail sales and market share data, in each case, as of April 2022. 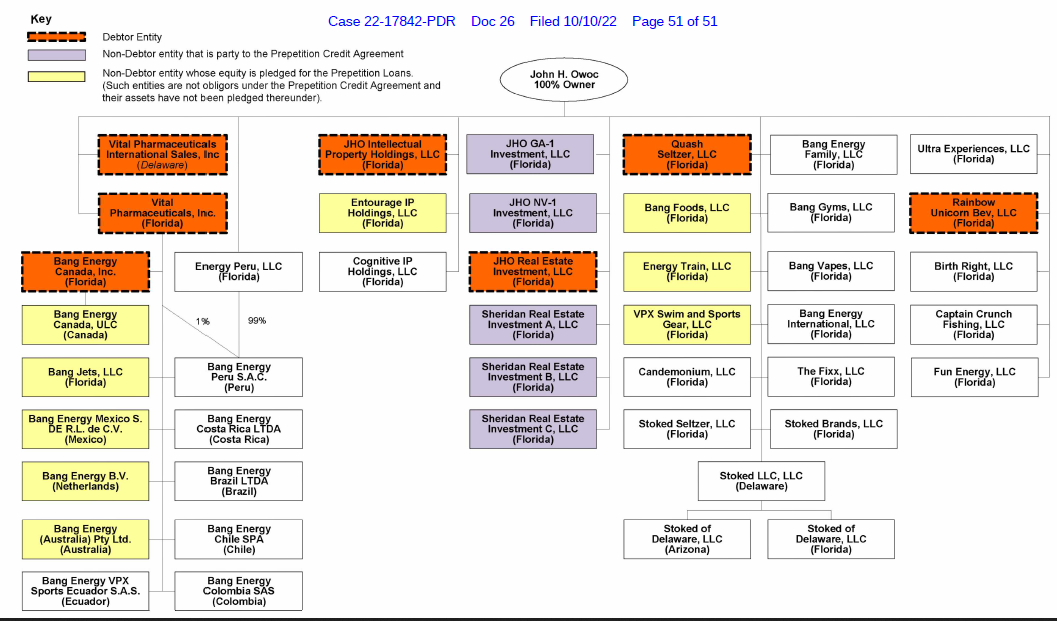