November 30, 2020 has been set as the administrative claims (including professional fee claims) bar bate.

In a press release announcing the emergence, “Under the Plan, an appointed Plan Administrator will, among other things, wind-down the affairs of the remaining bankruptcy estates, pay allowed claims and resolve disputed claims, and make distributions to creditors in accordance with the terms of the Plan. Thereafter, the Plan Administrator will close any remaining bankruptcy cases, and dissolve and liquidate the remaining debtors in accordance with the Plan.

This announcement follows the acquisition of substantially all of the Company’s assets by Harbin Pharmaceutical Group Holding Co., Ltd. (Harbin) on October 7, 2020, marking GNC’s next step in its brand evolution. Through the restructuring and court-approved sale to Harbin, GNC has optimized its store footprint, improved its financial standing and is now better positioned to meet the strong consumer demand for health and wellness products under Harbin's leadership.”

According to the Debtors' memorandum in support of Plan confirmation [Docket No. 1352]: “Less than four months after entering chapter 11, the Debtors are prepared, with the support of all their major constituents, to confirm the Sixth [eventually Seventh] Amended Joint Chapter 11 Plan….The Debtors filed these chapter 11 cases with a Restructuring Support Agreement executed by substantially all of their secured lenders — more than 92% of the Debtors’ Prepetition Tranche B-2 Term Loan Lenders and 87% of the Prepetition ABL/FILO Lenders. During the chapter 11 cases, and as contemplated by the Restructuring Support Agreement, the Debtors proceeded down a dual-track path, simultaneously pursuing both a standalone restructuring and a section 363 sale to maximize the value of the Debtors’ estates.

After an extensive marketing process, that value-maximizing transaction proved to be the sale of substantially all of the Debtors’ assets to Harbin Pharmaceutical Group Holding Co., Ltd (the ‘Sale’), which closed on October 7, 2020….The Debtors are happy to see that the GNC business will continue and that nearly all of their employees have received offers of employment with the go-forward business. With the Sale now consummated, the Plan provides for the wind down of the Debtors and the distribution of the Sale Proceeds as contemplated by the Plan and Sale Documents.

By virtue of the Settlement Motion and related Plan Support Agreement, the Debtors have also obtained the support of their primary unsecured constituents—the Ad Hoc Group of Convertible Notes and the Committee—through a global settlement that the parties agreed to in connection with the Sale and the Plan (the ‘Global Settlement’), memorialized in the Plan Support Agreement executed by the Ad Hoc Group of Convertible Notes and the Committee. Thus, the Plan embodies a consensual resolution of an array of litigable issues that could have sidetracked these cases, driving up their expense by multiples and damaging the Debtors’ business."

On September 18, 2020, the Court hearing the GNC Holdings cases issued an order approving the $770.0mn sale of the Debtors’ assets to Harbin Pharmaceutical Group Holding Co., Ltd. (the “Stalking Horse Bidder” or the “Buyer”)  [Docket No. 1202]. An executed version of the August 7th Stalking Horse APA is attached to the order at Exhibit A. The Buyer is the Debtors’ largest prepetition shareholder with a 41% equity holding as at the Debtors’ Petition date.

At the debtors' Plan confirmation hearing, Debtors' counsel estimated the tortal consideration to be $780.0mn comprised of $550 million cash; an undisclosed amount of second-lien take-back loans, and about $20 million in convertible and junior notes.

The Buyer has been central to the Debtors’ reorganization plans since the outset of their chapter 11 cases, but a finalized deal remained in doubt. At filing, the Debtors heralded a $760.0mn sale to the Buyer in a press release, which read in part: “Additionally, the Company, a significant majority of the Supporting Secured Lenders, and Harbin Pharmaceutical Group Holding Co., Ltd., an affiliate of GNC’s largest shareholder [41%], have also just reached an agreement in principle for the sale of the Company’s business. The term sheet documenting that agreement outlines a $760 million purchase price for the sale transaction, which would be executed through a court-supervised auction process at which higher and better bids may be presented.”

By the time of the Court’s July 22nd bidding procedures order that deal looked to have fallen apart, with all references to Harbin removed from that order. An objection from the Debtors’ creditors’ committee provided some indication that negotiations were not entirely dead, but the Debtors’ provided little other indication as to where their sales process stood.

The following is a summary of classes, claims, voting rights and expected recoveries (defined terms are in the Plan and/or Disclosure Statement; see also the Liquidation Analysis below):

Plan voting results [Docket No. 1350] were as follows:

The COVID-19 pandemic has caused a sizeable drop in revenue. Due in large part to the pandemic, the Debtors’ year-over-year revenues were down approximately 20.6%, 42.3%, and 39.1% in March, April, and May, respectively. This decline was the result of a decline in sales at US brick and mortar locations of 50-60% during April and May, partially offset by a significant increase in on-line demand of 80% to over 100% during April and May. As the Debtors’ e-commerce business has only been 8% of the overall US business, the surge in e-commerce demand has not been enough to offset the US brick and mortar declines. The Debtors’ International business has also been disrupted with more than 25% of all locations closed during April and May. While June results are improving, based on the performance of the locations that have reopened, the Debtors do not anticipate that the reopening of additional stores will generate near-term revenue that comes close to the Company’s pre-pandemic in-store revenue.

The lack of sales has affected the Company’s ability to expeditiously pay its trade creditors. In response, some trade creditors have demanded more restrictive trade terms from the Company. Some of the more restrictive trade terms, such as the requirement that the Company pay cash on delivery of products from its vendors, have further strained the Company’s liquidity position. While some of these adverse effects were initially counterbalanced with increased online sales, the cumulative effect of these circumstances has been a severe decline in the Company’s liquidity, and shared concessions by nearly all of the Company’s economic constituencies, including the management of trade vendor payments. As a result, certain vendor payments have been delayed in excess of 30 days past historical terms and in some cases even longer." 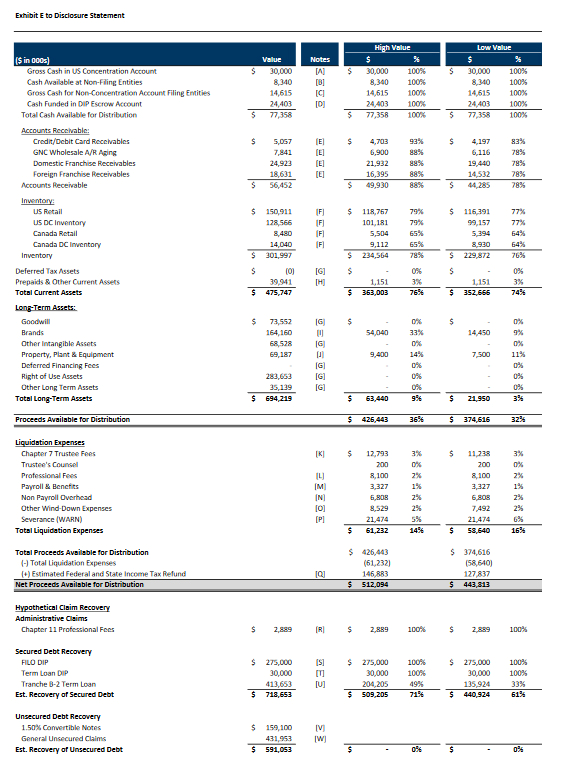 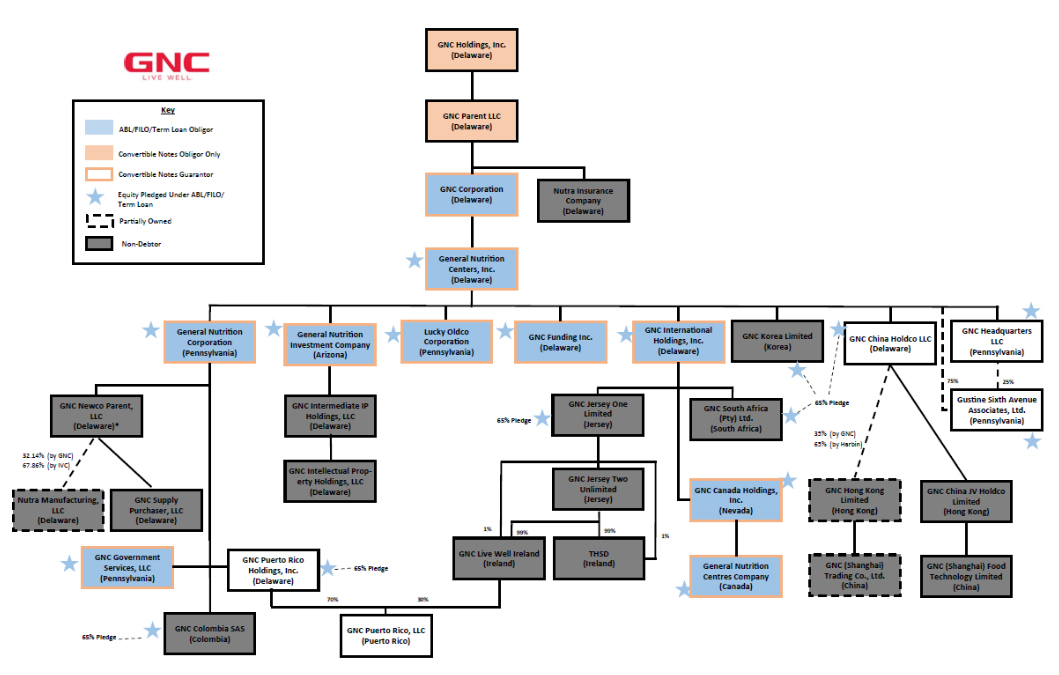 The brand touches consumers worldwide by providing its products and services through company-owned retail locations, domestic and international franchise locations, digital commerce and strong wholesale and retail partnerships across the globe. GNC’s diversified, multi-channel business model has worldwide reach and a well-recognized, trusted brand. By combining exceptional innovation, product development capabilities and an extensive global distribution network, GNC manages a best in class product portfolio. As of March 31, 2020, GNC had approximately 7,300 locations, of which approximately 5,200 retail locations are in the United States (including approximately 1,600 Rite Aid licensed store-within-a-store locations) and the remainder are locations in approximately 50 countries.”

Northwest Senior Housing Corporation – Landlord Seeks Dismissal of Cases, Argues That Plan Based on Flawed Premise that Lease Can Be Modified is Unconfirmable Fantasy