The Plan attaches a blackline against the version that was filed on the Petition date, with thePlan reflecting what appears to be a single material change, ie that Alameda is no longer either a "Releasing Party" or a "Released Party" for purposes of Plan releases and exculpation provisions (at least until the Debtors' Special Committee completes its investigation into "the facts and circumstances related to the Debtors’ loan to 3AC."

This is the first iteration of the Debtors' Disclosure Statement (hence no blackline although it includes significant disclosure as to post-filing events).

Also on August 5th, the Court hearing the Voyager Digital Holdings cases issued an order: (i) approving proposed bidding procedures in respect of the sale of substantially all of the Debtors’ assets, (ii) authorizing the Debtors to select a stalking horse bidder, and offer bidder protections to any selected stalking horse, and (iii) approving an auction/sale timetable culminating in an August 29th auction and a September 8th sale hearing [Docket No. 248].

The Amended Disclosure Statement states, “The Debtors seek to effectuate a comprehensive reorganization through either (a) a restructuring pursuant to the Stand-Alone Plan (a ‘Stand-Alone Restructuring’) or (b) a sale of the Company (a ‘Third-Party Transaction’) through either (i) an alternative chapter 11 plan of reorganization pursuant to which a controlling stake of the equity in Reorganized Voyager may be distributed to a third party purchaser (an ‘Alternative Plan’) or (ii) an orderly sale of all or substantially all of the Debtors’ assets through an asset sale pursuant to section 363 of the Bankruptcy Code (a ‘363 Sale’)

As an alternative to the Stand-Alone Plan, the Debtors may effectuate a Third-Party Transaction in the form of either (a) an Alternative Plan or (b) a 363 Sale if the Debtors determine, in their business judgment, that doing so would be more value maximizing for stakeholders. As described in greater detail in Article VI.B herein, the Debtors engaged in significant prepetition efforts to ascertain interest in the sale of all or substantially all of the Debtors’ assets or equity to a third-party investor. The Debtors continued such marketing efforts during these Chapter 11 Cases. Because the Debtors’ process remains ongoing, the form and structure of any potential Third-Party Transaction is currently unknown.”

The motion to approve the Disclosure Statement [Docket No. 289] states, “The Debtors are committed to proceeding expeditiously through these chapter 11 cases and returning value to their stakeholders, including customers, as soon as possible. To that end, prior to the Petition Date, the Debtors engaged in a marketing process to ascertain interest in a sale of the Debtors’ assets to, or an investment in the Debtors’ business from, a strategic thirdparty investor. Discussions with interested third parties ultimately revealed that an in-court process would be necessary to yield the most value-maximizing path forward for the Debtors’ stakeholders. Accordingly, the Debtors commenced these chapter 11 cases and continued to engage with interested strategic partners and investors. On August 5, 2022, the Court entered the Order (I) Approving the Bidding Procedures and Related Dates and Deadlines, (II) Scheduling Hearings and Objection Deadlines with Respect to the Debtors’ Sale, Disclosure Statement, and Plan Confirmation, and (III) Granting Related Relief [Docket No. 248] (the ‘Bidding Procedures Order’). The Bidding Procedures Order provides a roadmap for a potential sale of the Debtors’ business and set forth the procedures for obtaining bids from interested third parties. As of the date hereof, the Debtors have received several bids, and the Debtors expect to receive additional bids in advance of the Bid Deadline (as defined in the Bidding Procedures Order).

The Debtors understand the need to move expeditiously through these chapter 11 cases and facilitate distributions to Account Holders as soon as possible. Accordingly, the Debtors filed the Plan at the outset of these chapter 11 cases to provide a ‘floor’ for interested third parties to bid against. The Plan contemplates a holistic restructuring of the Debtors’ business that will provide Account Holders with a meaningful return on an expedited basis, and does not involve an investment from, or sale to, a third party. If the Debtors identify a transaction with a third-party investor that provides Account Holders with greater value than the value provided under the Plan, the Debtors will pursue such transaction and file an amended Plan and Disclosure Statement prior to the Disclosure Statement Hearing.”

The following is an unchanged summary of classes, claims, voting rights and expected recoveries (defined terms are as defined in the Plan and/or Disclosure Statement, the Liquidation Analysis has yet to be filed):

In a press release announcing the filing, the Debtors stated: "The proposed Plan of Reorganization (Plan) would, upon implementation, resume account access and return value to customers. Under this Plan, which is subject to change given ongoing discussions with other parties, and requires Court approval, customers with crypto in their account(s) will receive in exchange a combination of the crypto in their account(s), proceeds from the 3AC recovery, common shares in the newly reorganized Company, and Voyager tokens. The plan contemplates an opportunity for customers to elect the proportion of common equity and crypto they will receive, subject to certain maximum thresholds.

The Company continues to evaluate all strategic alternatives to maximize value for stakeholders.

The Company has over $110 million of cash and owned crypto assets on hand, which will provide liquidity to support day-to-day operations during the Chapter 11 process, in addition to more than $350 million of cash held in the For Benefit of Customers (FBO) account at Metropolitan Commercial Bank. Voyager also has approximately $1.3 billion of crypto assets on its platform, plus claims against Three Arrows Capital (“3AC”) of more than $650 million.

Voyager previously announced that its subsidiary, Voyager Digital LLC, issued a notice of default to 3AC for failure to make the required payments on its previously disclosed loan of 15,250 BTC and $350 million USDC. Voyager is actively pursuing all available remedies for recovery from 3AC, including through the court-supervised processes in the British Virgin Islands and New York."

Stephen Ehrlich, the Debtors'Chief Executive Officer, noted: “This comprehensive reorganization is the best way to protect assets on the platform and maximize value for all stakeholders, including customers….While I strongly believe in this future, the prolonged volatility and contagion in the crypto markets over the past few months, and the default of Three Arrows Capital (3AC) on a loan from the Company’s subsidiary, Voyager Digital, LLC, require us to take deliberate and decisive action now. The chapter 11 process provides an efficient and equitable mechanism to maximize recovery.”

The Debtors provide [Docket No. 15]: "…this is not a “free-fall” filing without direction. On the contrary, Voyager has a path forward and a plan to swiftly bring these chapter 11 cases to an appropriate conclusion. Voyager’s proposed chapter 11 plan of reorganization…contemplates a standalone restructuring that the Company can effectuate without a sale or a strategic partner. The Company will continue a robust marketing process—one that was already underway prepetition—to test the value proposition of the Company’s business. This process is designed to position Voyager for success in a turbulent market environment, allowing the Company to support go-forward operations and preserve the value of its customers’ assets."

In a declaration in support of first day filings (the “Ehrlich Declaration”) [Docket No. 15],  Stephen Ehrlich, the Debtors’ Chief Executive Officer, provides: “Recent events in the world economy have roiled traditional markets and the cryptocurrency markets alike. The lingering effects of the COVID-19 pandemic, coupled with rampant inflation and the adverse effects of the war in the Ukraine on the world economy, contributed to a massive sell-off in traditional assets in 2022. Total wealth in the United States declined by $5 trillion between January 2022 and May 2022.

All major cryptocurrencies experienced significant declines in the first half of 2022; Bitcoin slumped 37.3% in June 2022 alone and is down 60% year-to-date. Companies in the cryptocurrency industry also experienced significant equity declines as declining cryptocurrency prices pressured margins and investor pessimism grew….Distressed situations faced by two industry participants—Terra and Three Arrows Capital—exacerbated this ‘cryptocurrency winter.’ The eventual implosion of Terra and Three Arrows Capital, and the resulting fallout, created the ‘cryptopocalyse’.”

The Ehrlich Declaration continues: “… to provide customers with a yield on the assets they store with Voyager, Voyager loans out a portion of its cryptocurrency reserves to third parties. Voyager customers expressly acknowledge that Voyager may loan the customer’s deposited assets (which are pooled with all other retail investors’ deposited assets) to third parties when they agree to the Voyager customer agreement, a requirement to deposit assets on Voyager’s platform.

After the Luna crash in 2022, the Company began to assess 3AC’s downside exposure and the likelihood of repayment under the 3AC Loan. The Company made an initial request for a repayment by 3AC of $25 million of USDC by June 24, 2022, and subsequently requested repayment of the entire outstanding balance of Bitcoin and USDC by June 27, 2022. 3AC did not repay either requested amount. Accordingly, on June 27, 2022, Voyager issued a notice of default to 3AC for failure to make the required payments under the 3AC Loan.

Once it became clear that 3AC had significant exposure to the Luna crash, Voyager’s management team immediately engaged in efforts to identify sources of potential liquidity to stabilize the Company’s business and ensure that the Company remained adequately capitalized. The Alameda Loan Facility provided the Company with $200 million cash and USDC and 15,000 Bitcoin subject to certain restrictions. The Company could draw on the facility in either U.S. dollars or Bitcoin, providing the Company with capital to fund its business and cryptocurrency to facilitate trade execution if necessary. The Alameda Loan Facility also communicated to the market at large that Voyager had significant cash on hand and support from one of the industry’s key players.

The Alameda Loan Facility, however, was only a partial solution to the Company’s liquidity issues. General market pessimism due to significant declines in cryptocurrency prices, coupled with concerns about the 3AC Loan, contributed to an influx of customer withdrawals."

As we previously reported, on July 4th the Debtors announced that they were temporarily suspending trading, deposits, withdrawals and loyalty rewards, effective at 2:00 p.m. Eastern Daylight Time, Friday July 1. The Debtors referred to this suspension as "Maintenance Mode."

In making the announcement, Stephen Ehrlich, the Debtors'Chief Executive Officer, noted: "This was a tremendously difficult decision, but we believe it is the right one given current market conditions….This decision gives us additional time to continue exploring strategic alternatives with various interested parties while preserving the value of the Voyager platform we have built together. We will provide additional information at the appropriate time.

According to the Debtors: “Voyager Digital Ltd. is a fast-growing, publicly traded cryptocurrency platform in the United States founded in 2018 to bring choice, transparency, and cost efficiency to the marketplace. Voyager offers a secure way to trade over 100 different crypto assets using its easy-to-use mobile application, and earn rewards up to 12 percent annually on more than 40 cryptocurrencies. Through its subsidiary Coinify ApS, Voyager provides crypto payment solutions for both consumers and merchants around the globe.” 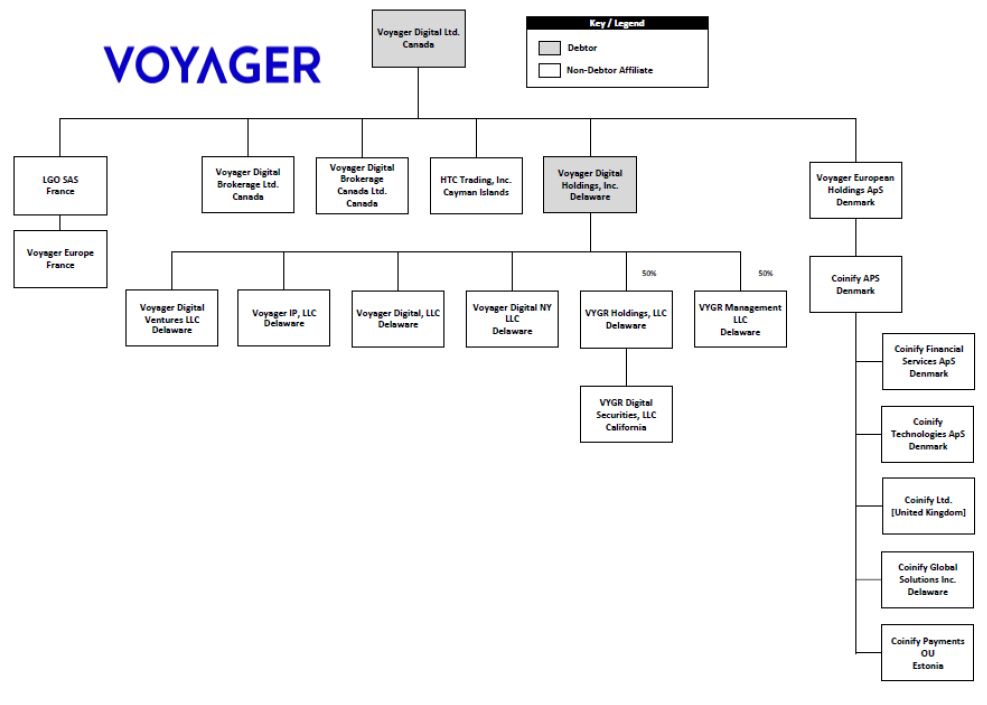