July 18, 2022 – In advance of their July 27th Plan confirmation hearing, the Debtors filed a Modified First Amended Plan of Liquidation and a related blackline showing minor changes to the version of Plan filed on June 8, 2022 [Docket Nos. 616 and 617, respectively]. The Debtors also filed (i) a memorandum of law in support of Plan confirmation (the "Memorandum") [Docket No. 623 which attached a proposed confirmation order and notes that there are no outstanding objections] and (ii) Plan voting results [Docket No. 618].

On June 14, 2022, the Court issued an order approving: (i) the adequacy of the Disclosure Statement filed by the Debtors and the Official Committee of Unsecured Creditors (the “Committee,” and together with the Debtors, the “Plan Proponents”), (ii) Plan solicitation and voting procedures and (iii) a timetable culminating in a the July 27th Plan confirmation hearing [Docket No. 557].

The Memorandum provides the most recent summary: "The Plan, which resulted from extensive negotiations among the Debtors, the Committee, and the Debtors’ lender to balance numerous competing interests, represents a significant achievement that will pave the way for an efficient liquidation and claims reconciliation process following the anticipated Closing of the Asset Sale. As a result of the solicitation process, the Plan has obtained the overwhelming support of each voting class. Among other things, the Plan provides for the establishment of a Liquidation Trust and appointment of Liquidation Trustee who will liquidate the remaining assets* of the Estates after the Closing of the Asset Sale and distribute those assets consistent with the Plan’s terms and the priorities of the Bankruptcy Code. The Plan is the culmination of months of efforts by the Plan Proponents to restructure the Debtors’ debts, set the table for the Closing of the Asset Sale, preserve value for the Estates, and establish a mechanism for returning that value to the Debtors’ creditors.

* The Debtors project that the Estates will have approximately $8.0mn of cash in the aggregate as of an assumed Effective Date of August 31, 2022 made up largely of asset sale proceeds and DIP order reserves.

Upon the Closing of the Asset Sale, which the Debtors expect will occur on or about August 31, 2022, the Debtors will have liquidated substantially all of their assets, excluding, among other things, the Retained Causes of Action (including Tort Claims and D&O Claims). The net proceeds of the Asset Sale, together with the remaining assets of the Estates (including the Retained Causes of Action) and their proceeds, will be used to fund the payments and distributions provided for in the Plan, including any recoveries to the Debtors’ creditors. The Plan Proponents believe that the Plan will put the Debtors in the best position under the circumstances to realize value from their estates for the benefit of all constituents. In light of the broad notice of the Plan, the overwhelming support of all Impaired stakeholders, and the satisfaction of the confirmation requirements of section 1129(a) of the Bankruptcy Code as set forth more fully below, the Plan should now be confirmed.

The Disclosure Statement [Docket No. 544] notes, “The Plan is a plan of liquidation which, among other things, provides for a Liquidation Trustee to liquidate or otherwise dispose of the remaining assets of the Estates, to the extent such assets were not previously monetized to Cash or otherwise transferred by the Debtors prior to the Effective Date (including, without limitation, pursuant to the postpetition Bankruptcy Court-approved sale of substantially all of the Debtors’ assets, discussed in further detail below).

The Liquidation Trustee would also distribute all net proceeds to creditors, including payment in full of all Allowed Administrative Expense Claims, Allowed Priority Tax Claims, Allowed Other Priority Claims (Class 1) and Allowed Other Secured Claims (Class 2) (subject to the Liquidation Trustee’s election of alternative treatments under the Plan and solely to extent of the value of the collateral which secured such Claims), generally in accordance with the priority scheme under the Bankruptcy Code, subject to the terms of the Plan.

In these Chapter 11 Cases, subject to the occurrence of the Closing, the Debtors have already liquidated substantially all of their respective assets as part of the Asset Sale, excluding Causes of Action that have not been waived or settled in accordance with or pursuant to the Plan, all of which are preserved unless the Plan expressly provides otherwise. The net proceeds remaining from the Asset Sale, together with the net proceeds from the sale or other disposition of the remaining assets of the Estates after the Effective Date, will be used to fund recoveries under the Plan to Holders of Allowed Claims entitled to distributions under the Plan….

The Estates also contain potential Causes of Action that will be transferred to the Liquidation Trust under the Plan, all of which are preserved unless the Plan expressly provides otherwise. No value has been attributed to litigation claims for purposes of this Disclosure Statement and the Plan Recovery Analysis.”

The following is a unchanged summary of classes, claims, voting rights and expected recoveries (defined terms are as defined in the Plan and/or Disclosure Statement; see also the Plan Recovery Analysis below):

FN: For the avoidance of doubt, the Other MPT Obligations do not include payments to be made to the MPT Parties on account of the DIP Obligations and the Postpetition Lease Obligations (if any). Pursuant to the Sale Approval Order upon the Closing of the Sale, prior to the Effective Date of the Plan, the Buyer will make the Direct MPT Payment of up to $34,000,000 to the DIP Lender and the MPT Prepetition Lender.

FN: The Debtors expect that Class 4 General Unsecured Creditors will likely receive a recovery in the approximate range of 5-15% after accounting for the potential assumption of Executory Contracts and Unexpired Leases pursuant to the Sale and the anticipated objection to certain Proofs of Claim by the Debtors or the Liquidating Trustee. Potential recoveries on Estate Causes of Action have not been included in this estimate of the recovery range.

On July 18,2022, the Debtors’ claims agent notified the Court of the Plan voting results [Docket No. 618] which were as follows.

The Disclosure Statement [Docket No. 544] attaches the following exhibits

The Debtors' Plan Supplement [Docket No. 602] attaches the following:

On February 23, 2022, further to a January 10th bidding procedures order [Docket No. 188] and a February 23rd sale hearing, the Court hearing the Watsonville Hospital Corporation cases issued an order approving the sale of substantially all of the Debtors’ assets to Pajaro Valley Healthcare District Project (the “Buyer” or the “Project”) [Docket No. 347].

On February 16th, the Debtors notified the Court that absent the receipt of any further qualified bids prior to a February 14th bid deadline, the auction scheduled for February 17th had been canceled and the Buyer was designated as the successful bidder [Docket No. 308].

The Project’s stalking horse bid includes cash consideration comprised of (i) amounts due to MPT of Watsonville Lender, LLC (“MPT”) in respect of DIP borrowings (including the roll-up of $3.5mn advanced on November 30th, but excluding other prepetition loans) up to $25.0mn and (ii) $9.0mn to be paid to MPT on account of its secured claim against the Debtors’ personal property assets. 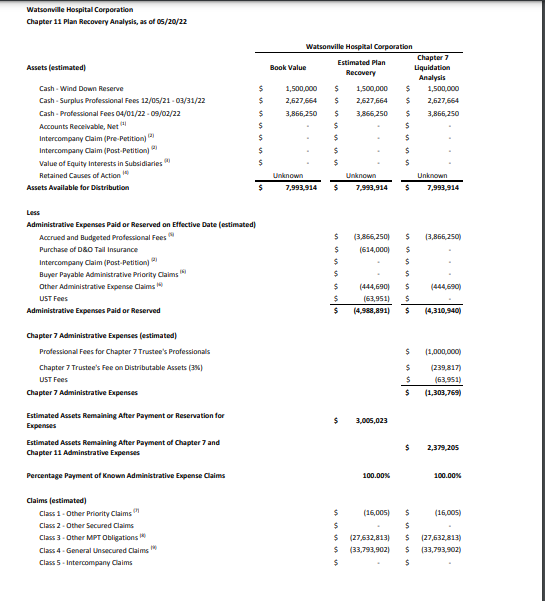 According to the Debtors: “Watsonville Community Hospital is your community healthcare provider; a 106 bed facility that offers a comprehensive portfolio of medical and surgical services to the culturally diverse tri-county area along California’s Central Coast.

We believe in the power of people to create great care. We’re more than 620 employees and over 200 physicians strong. The physicians and staff at Watsonville Community Hospital strive to exceed patient expectations, while delivering compassionate, quality care.” 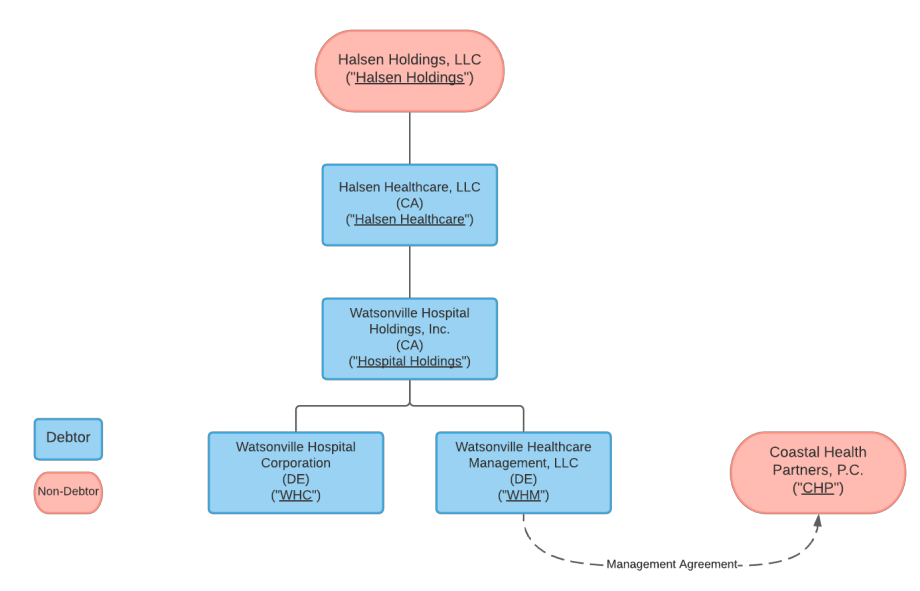