In a press release announcing the filing, the Debtors advised that: “During the first quarter of 2020, Yuma's cash position deteriorated, and its cash flow from operations is no longer sufficient to cover its operating costs.  The Company plans to continue to operate its business in the normal course during the court-supervised bankruptcy process.

The Debtors intend to use the Chapter 11 process to implement the orderly liquidation of their assets in an effort to maximize values and recoveries to stakeholders.

The Debtors intend to seek immediate court approval to conduct an auction for substantially all of their assets, which primarily consist of operating and non-operating interests in several properties in Louisiana, Texas, Wyoming and Oklahoma.  The auction is expected to occur within the first 90 days of the bankruptcy filings."

The Schnur Declaration (defined below) provides: "Facing a liquidity shortfall at the end of March 2020, no actionable line of sight to meaningfully extend that runway without jeopardizing the value of their assets, and limited ability to achieve the consensus needed to deleverage, the Debtors file these chapter 11 cases to conduct an orderly liquidation of its assets."

The Schnur Declaration states: "Like many of its industry peers, Yuma experienced a significant decline in its financial health as a result of the depressed oil and natural gas price environment that spanned from 2015 to current. However, the decline in the financial health of the company stemmed not only from dropping commodity prices, but more importantly with a continuing high level of G&A for a company it’s size, and multiple drilling failures. This was exacerbated by too much leverage and a series of producing well issues and breakdowns. Ultimately, Yuma ran out of liquidity necessary to conduct daily operations. Specifically, over the past several years, market forces, including, most significantly, the sustained downturn in commodity prices between 2015 and 2019 (with brief respites along the way), have affected nearly every oil and gas company, forcing many to file for chapter.

Those companies with more highly leveraged balance sheets were and continue to be more at risk." 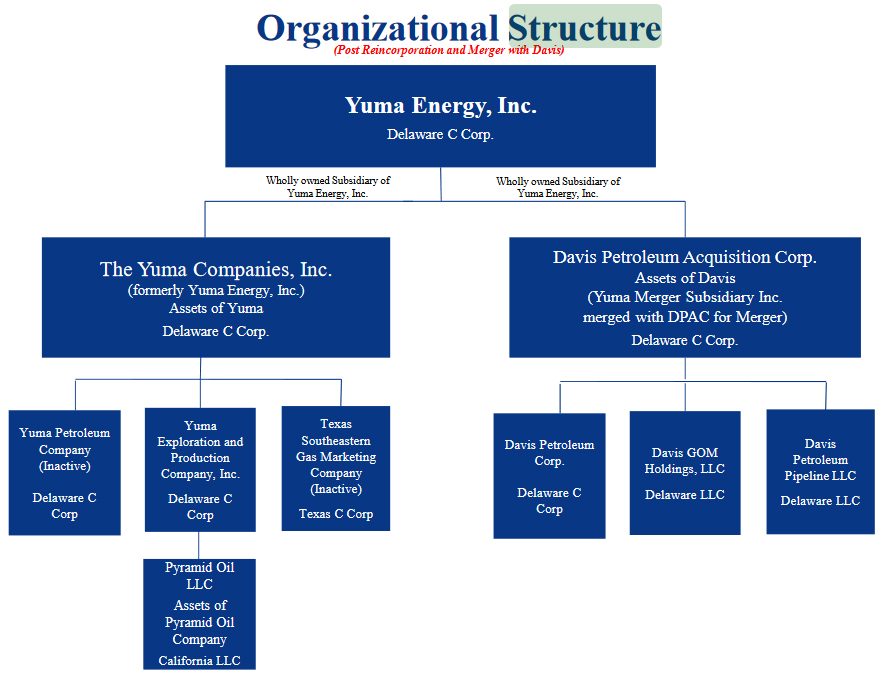 Yuma Energy, Inc., a Delaware corporation, is an independent Houston-based exploration and production company focused on acquiring, developing and exploring for conventional and unconventional oil and natural gas resources.  Historically, the Company's activities have focused on inland and onshore properties, primarily located in central and southern Louisiana and southeastern Texas.  Its common stock is listed on the NYSE American under the trading symbol "YUMA."

The Debtors are an independent Houston-based exploration and production company with production and development activities in the Rocky Mountain, Mid-Continent, Gulf Coast, and West Texas regions of the United States, with a significant majority of those assets in the Gulf Coast region of Louisiana. The Debtors primarily operate in the “upstream” oil and gas sector and conduct their exploration and production activities across Louisiana, Louisiana state waters and Texas. The Debtors’ assets are predominantly mature, deep (15,000 feet plus) properties with long-lived end of life production, relatively predictable decline curves with high operating costs. Its opportunities to develop new production are similarly deep, high cost and higher-risk development targets.